Not to be confused with Temple of Wisdom (Bastion). 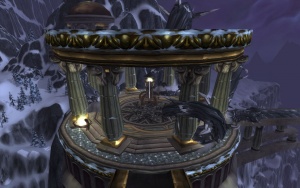 The Temple of Wisdom is one of the many Titan temples of the Storm Peaks, located southwest of Ulduar's Halls of Stone. The columns of the Temple are entwined by strange twisted growths, possibly some kind of plant growth or the dead tentacles of a forgotten one, as they bear a resemblance to the tendrils of C'Thun.

Presumably, Loken - the Old God-corrupted master of the "sons of iron" - was the Watcher (or Keeper) of the Temple of Wisdom, as he can be found seated within its throne during the confrontation with his brother Thorim in

Loken can be found the final boss in the Halls of Lightning.