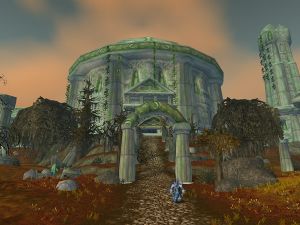 The Temple of Zin-Malor is an ancient building situated in the Ruins of Eldarath. It was once a prominent night elven temple to the worship of their goddess, Elune. Its similarity to the nearby Temple of Arkkoran is striking, as they both have a very similar design to the current Temple of the Moon in Darnassus. The temple is currently occupied by the Spitelash tribe of naga under the leadership of Warlord Krellian, who himself inhabits the temple in a place of honor. The

[Crystal of Zin-Malor] once rested here.

The temple has at least one underground royal vault, which contains a chest of pandaren design, the last gift the pandaren gave to the Highborne before cutting ties with the night elves. The pandaren said it contained all the arcane magic the Highborne would ever need, but was in fact completely empty. The gift was actually a message of advice and wisdom to the Highborne: that they did not actually need arcane magic at all.[1]

In Lands of Mystery, the Temple of Zin-Malor is simply called "Elune's temple".[2]