Temple of the Moon

This article is about the temple in Darnassus. For other uses, see temple of Elune (buildings). 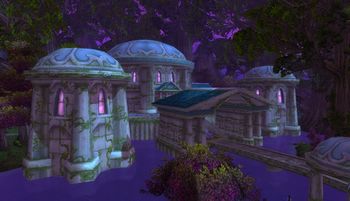 The Temple of the Moon (or the Temple of Elune)[1][2] in Darnassus was a major temple dedicated to the goddess Elune, the dwelling and moonlit sanctum[3] of the Sisters of Elune, and the center of all night elven spiritual life. The temple also served as the seat of government in Darnassus and Teldrassil,[4] with the night elven leaders Tyrande Whisperwind (High Priestess of Elune) and Malfurion Stormrage residing here. Incidentally, it was one of the largest artificial structures in the region.

The building itself was built in Darnassus following the Battle of Mount Hyjal that ended the Third War. The Sisterhood of Elune also dispatch missions from the temple, such as that of Gwennyth Bly'Leggonde to investigate strange happenings near Auberdine.[5] In its center was the statue of Haidene placed in the middle of a moonwell[6] which was used for bathing and recuperating.[7] The waters of the temple are known to be blessed,[8] being described as the water of Elune herself.[9] 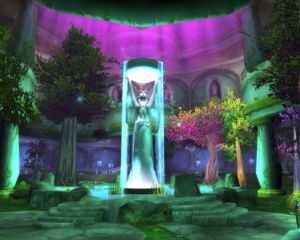 The interior of the temple. 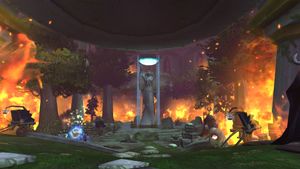 The temple, during the Burning of Teldrassil.

The Temple of the Moon was built around the same time as the rest of Darnassus when the night elves first made their home on Teldrassil. Much of the temple itself was crafted from stone brought from the mainland and transported by magical means.[10] It would become the headquarters of the Sisterhood of Elune, and the de facto capital building of Darnassus as the residence of High Priestess Tyrande Whisperwind, the legendary kaldorei leader.

When the War Against the Nightmare ended sometime before the Cataclysm, a weakened Malfurion Stormrage was taken to the temple in order to recover from the struggle, being placed underneath the statue in the main chamber. Soon afterwards, Malfurion and his lover Tyrande would marry within the temple, having been together for well over 10,000 years prior.[1]

The night elven hero Jarod Shadowsong would emerge from seclusion when he traveled to the Temple of the Moon with his dying wife Shalasyr. Despite their best efforts, neither the priestesses nor Tyrande herself could save Jarod's mate, and she would die soon afterwards. Her body would be placed within the temple,[11] and her funeral ceremony would also later take place there.[12]

Throughout its history, the temple has served many different functions. Tyrande and Malfurion eat their meals together in a pavilion on the temple grounds.[13] During the trial of Garrosh Hellscream in Pandaria, Tyrande was chosen to lead the prosecution as the accuser, basing herself from the temple and returning to it to plan her case after court adjourned.

Some time after the attack on the Explorers' League and the Sentinels in Silithus, Sentinel Cordressa Briarbow led survivors into Darnassus and showed Gavvin Stoutarm, Inge Ironfist, and Arwis Blackstone the temple. The dwarves were in awe.[7]

During the Burning of Teldrassil, the temple was a gathering place for the refugees. After Genn Greymane arrived to collect Mia and the temple priestesses, the priestesses refused to leave.[14] Instead, they decided to pray for Elune to ease the suffering of those who could not be evacuated.[15] 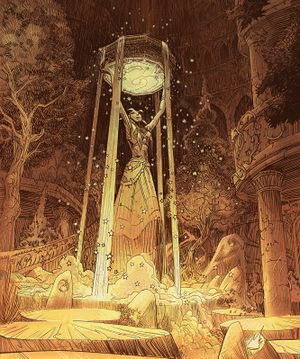 The temple's interior as seen in Elegy.