High atop the frigid northern peaks of the Kun-Lai Summit looms the Temple of the White Tiger (or Tiger Temple),[1] an ancient training ground protected by an elite force of martial priests, along with the spirit of the White Tiger itself.[2] It was secretly constructed by the first monk, Kang the Fist of First Dawn, and his followers once they relocated to Kun-Lai Summit during the reign of Emperor Lao-Fe the Slavebinder, after the mogu heard word of the Pandaren Revolution.[3] Following the Siege of Orgrimmar, the trial of Garrosh Hellscream took place in the temple, attended by the Alliance, Horde, August Celestials and the Shado-Pan. It was attacked by Garrosh's last followers led by Zaela to create a distraction for Kairoz who transported Garrosh into an alternate Draenor.[4]

Near the building holding Xuen himself is The Emperor's Burden - Part 6, providing a small bit of lore about Shaohao, the last emperor of Pandaria. Interacting with the shrine is one of the objectives of

[The Seven Burdens of Shaohao], a Pandaria exploration achievement.

Gurgthock and Wodin the Troll-Servant return for the fourth round of their Ring of Blood, er... Amphitheater of Anguish, um... Crucible of Carnage, ah... Arena of Annihilation event, for level-90 adventurers only!

Several NPCs at the most likely areas a level 87 would be, namely Wanderer Chu, Farmhand Bo, Hopsmaster Chang and Leni Kelpenstout start the Vale of Eternal Blossoms storyline with 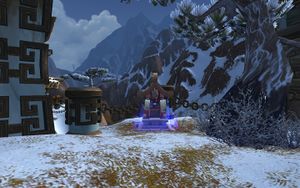 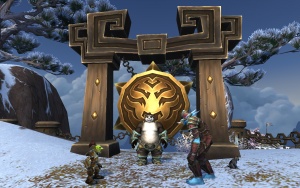 The Xuen Shield Bearers may come from the temple.