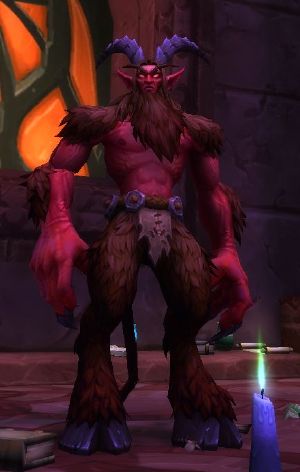 Terestian Illhoof is a satyr located in the Repository of Karazhan. He hides in a secret passage behind a bookshelf in the library. Cleansing of his presence will halt the respawning of demons directly by the bookshelf. He is an optional boss, but his loot table makes his death profitable to most adventurers.

Terestian Illhoof was responsible for the death of Dougan. Years later he was killed by Lieren, who crushed his head in with her stormhammer.

At least one healer with a quick reaction time should be designated to heal sacrifice victims. A paladin works well here, since they can bubble out of it if they themselves become sacrificed.

Aggro
Ah, you're just in time. The rituals are about to begin!

Death
My life is yours, oh great one...

How he returned when killed either by Dougan's children or by the adventurers (it is not stated which event happened first) hasn't been stated, but it is possible that the cursed tower of Karazhan brought him back or that he, as a demon, was revived in the Twisting Nether and would return to the same place he was previously killed. If so, he could have traveled through the Netherspace.

Boss Slayers Instructional videos on all the KZ bosses.
Retrieved from "https://wow.gamepedia.com/index.php?title=Terestian_Illhoof&oldid=5249812"
Categories: