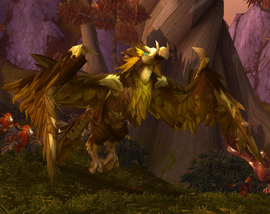 Teroclaws are a type of large predatory birds found in the forests of Talador on Draenor. They use their strong beaks to sever both flesh and bone and are the rulers of Talador's skies, rather than the rylaks found in many of Draenor's other locales.[1] They are potent hunters of the small and furry.[2]

The teroclaw Kil'uun has taken to flying near the Horde outpost Vol'jin's Pride and has been described as having crazy in its eyes.[3]