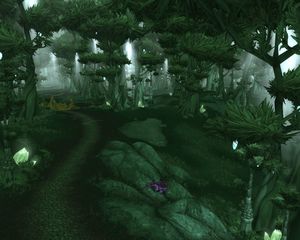 Terokkar Forest (pronounced "TEH-row-kawr"),[1] once known as Talador and the Spires of Arak, is a zone in Outland located east of Nagrand, west of Shadowmoon Valley, southeast of Zangarmarsh, and southwest of Hellfire Peninsula. This forest was most likely named after Terokk, the greatest king in arakkoa history. Formerly it was known as Talador.

Once known as Talador, the region was a forest of red and orange leaved trees that bathed the entire area in a perpetual autumn hue. These beautiful olemba trees, and the draenei's equally impressive gardens surrounded the draenei's greatest city on Draenor; Shattrath. A splendorous monument to the skills of the draenei artificers, even in exile, the city's greatness was matched by that of the holy mausoleum Auchindoun; the place where all draenei souls prepared for their journey into the afterlife and where many of their bodies were laid to rest. The smaller city, Tuurem, was just as noteworthy as its more magnificent neighbors as it sat at a crossroads in the area and one seeking to travel from Shattrath to Karabor would likely pass through the city. At this time, only the region closest to the Spires of Arak was known as Terokkar Forest by the Arakkoa Outcasts and it was under their control.[2]

When the Orcish Horde rampaged across Draenor, Talador was rendered the draenei's final stronghold. The Orcish Horde were repelled from Talador for a time, but when they imbibed the Blood of Mannoroth the demonic fury they were granted gave them the power they needed to cut through to the city of Shattrath itself. Their fel magic corrupted the region, turning the red and orange trees a pale, dusky green that transformed the forest into a dark, eerie woodland. The siege of Shattrath ultimately left the city in ruins and the draenei scattered and presumed extinct by the orcs and their Burning Legion masters.

Once the majority of the Orcish Horde departed for Azeroth, all of Talador came under the dominion of the Arakkoa Outcasts and it was all renamed Terokkar in honor of their lost king. At a later point, the orcs who had conquered Auchindoun performed a ritual that destroyed the building and much of the surrounding area, creating the Bone Wastes.

The flora consists of mostly dark green forest vegetation of crystal pines known as olemba trees. Shattrath City lies in the northwestern portion of zone. Alliance and Horde each have a town.


The multi-winged instance Auchindoun can be found in this zone, containing four separate 5-man dungeons. There are no raid dungeons, micro dungeons, battlegrounds, or arenas in this zone. The spirit towers of the Bone Wastes provide a world PvP opportunity.

Every so often you can hear a roar while near Auchindoun - this is Teribus the Cursed, flying in circles around Auchindoun. 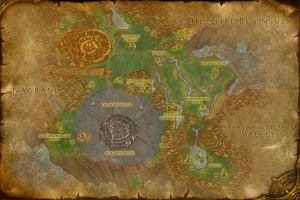 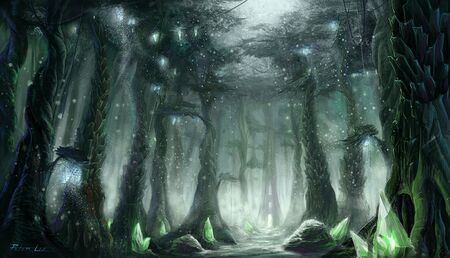 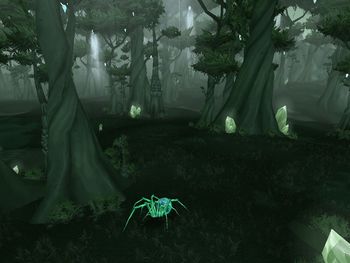 Archmage Khadgar resides in Shattrath City and can be found in its center.