Teron Gorefiend, born Teron'gor,[5] was one of Gul'dan's followers and a member of the Shadow Council. In death, he became the first of the necromantic terrors that became known as death knights — the warriors promised by Gul'dan to appease Orgrim Doomhammer and combat the human mages' powerful magic. Gorefiend convinced Ner'zhul to unite the Horde of Draenor and invade other worlds but was slain by Turalyon at the Black Temple as the planet tore itself apart. Years later he was resurrected once more and returned to the Black Temple where he allied with Illidan Stormrage.

Teron'gor was a young but highly respected shaman of the Shadowmoon clan. Seven years before the opening of the Dark Portal, Gul'dan met him and won him to his side by showing Teron'gor the powers of fel magic. Teron'gor had spent too long trying and failing to call on the elements for aid (unaware that the orcs' recent troubles with the elements was due to Gul'dan), and upon seeing fel knew he'd found the means to make a difference in the world and help his troubled race. Teron'gor was the first Shadowmoon shaman to become a warlock, but he was not the last. Gul'dan slowly won others to his side, and whatever noble intentions they had were twisted by fel energy. The corruptive magic twisted their thoughts and darkened their hearts, making them loyal to Gul'dan alone.[6] When Gul'dan formed the Shadow Council to lead the Horde in secret, its initial members were the Shadowmoon warlocks, including Teron'gor.[7]

When the Horde assaulted the Temple of Karabor, many draenei clerics were taken prisoner and were told that they were being marched to Hellfire Citadel far to the north. Outside the walls of the temple, Teron'gor took the lives of every last one of them. The spirits of the clerics of Karabor remain outside the walls to this day.[8]

After the fall of Shattrath City, many Vindicators, priests, and Rangari fled to Auchindoun in hopes of defending it from the Horde. Exarch Maladaar organized the military defenses, and they fiercely defended Auchindoun from Teron'gor and the Shadow Council. They also received aid from Auchindoun's departed spirits, and slaughtered many of the Shadow Council's agents. As Maladaar and his forces closed in, Teron'gor sought out the warlocks who pooled their powers together and reached beyond the veil of reality. They sought to bring a powerful demon into the world, but in their wild desperation found something else instead: Murmur. This otherworldly elemental creature was pulled to Draenor from a distant corner of the universe, and the shockwave on its arrival ripped the earth asunder. Many draenei were killed and Auchindoun was blasted apart. Waves of destructive energy rolled out and leveled the surrounding forest.[9] Maladaar and a handful of his draenei used their magics to shield themselves from the blast. But though they survived, they no longer had the numbers to resist the Shadow Council. Teron'gor and his warlocks overwhelmed the draenei and bound them in chains, and contained Murmur deep within Auchindoun as well.[10] 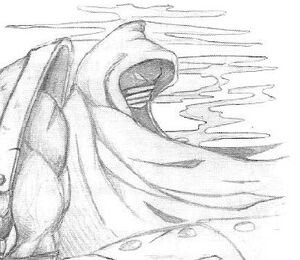 When Gul'dan was incapacitated as the result of being in Medivh's mind when he was killed, the Shadow Council was discovered by Orgrim Doomhammer. Doomhammer had recently come to power through the assassination of Blackhand, and tortured Garona Halforcen to discover the Council's location. The majority of its members were killed by Doomhammer's furious surprise attack, including Teron'gor by Doomhammer himself.

When Gul'dan recovered from his catatonic state and was on the verge of joining the Shadow Council in death, he "submitted" to Doomhammer's authority and promised to create warriors to fight for the Horde and counter the powerful magic of the humans. Doomhammer allowed him to live, to carry out this promise. Gul'dan took the corpses of the fallen Knights of Stormwind, and intended to imbue the rotting corpses with the souls of the Shadow Council. Nothing worked until he decided to sacrifice the necrolytes and cut out their hearts. He transmuted these hearts into powerful jewels, which were then affixed into truncheons. Upon making this stride, Gul'dan informed Doomhammer of his success. Placing the first truncheon into the hand of one of the corpses, the warlock and the Warchief watched as the energies of the necrolyte's heart that powered the weapon coursed through the corpse, until its eyes finally opened. Teron'gor had returned, now known as Teron Gorefiend.[11]

Gorefiend, Gaz Soulripper, and the other death knights swore allegiance to Doomhammer and fought for the Horde where their powerful energies aided in many battles. When Gul'dan abandoned the orcish Horde for the Tomb of Sargeras, Gorefiend remained in the service of the Warchief until he was defeated. Following Doomhammer's defeat Gorefiend and his death knights led the Horde to the Dark Portal, convinced that reaching the safety of their home world was their only hope of survival. However the Alliance forces hounded their every step.

As the Alliance overtook the Horde before the Dark Portal, Gorefiend and his death knights called upon the fury and terror of their necromantic arts. While this did not defeat the Alliance, it did enough damage that the Horde was able to slip through the portal and return to Draenor.[12] 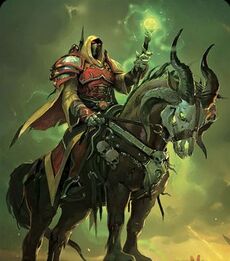 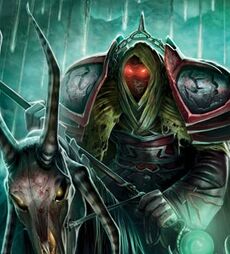 Leading the death knights beyond the Dark Portal before its destruction, Gorefiend remained on Draenor until he convinced Ner'zhul, Gul'dan's former master, to come to the forefront and unite the remaining clans into the Horde of Draenor. Ner'zhul intended to open new dimensional gateways to other worlds, and Gorefiend desired to claim a world for his own,[13] but both needed powerful items to stabilize their portals. To that end, Ner'zhul sent Gorefiend through a reconstructed Dark Portal to claim two powerful artifacts required for his spell: The Book of Medivh and the Eye of Dalaran.

At first, Gorefiend entered the Royal Library in Stormwind City only to find the Book gone and the guard slain with an Alteraci blade.[14] After failing to gain the support of the sons of Blackhand, Gorefiend encountered Deathwing, the insane and scheming Aspect of the black dragonflight, who offered aid in exchange for being allowed to travel to Draenor, where he could safely hide the prized eggs of his brood.[15] Gorefiend rode on Deathwing's back as they traveled to Alterac, where Gorefiend demanded the book from its imprisoned king, Aiden Perenolde. Perenolde agreed to turn over the book in exchange for the Horde slaying their Alliance wardens.[16] Upon securing the Book of Medivh, Gorefiend — again, with Deathwing providing transport, his dragons carrying the warriors — flew to Dalaran where he was able to take the Eye from its secure vault. He tossed a gold coin into the Eventide's fountain, which he claims was not for a wish, but as 'payment' for what he took up and fled away.[17] Gorefiend rejoined the Horde in Draenor and made the march with Ner'zhul to the Black Temple to perform the ritual. In the end, it was all for naught; Ner'zhul escaped to the Nether with his chosen followers, leaving the Horde leaderless and stranded on Draenor as it tore itself apart from the unstable rifts he had created. Gorefiend himself fell in battle against Turalyon on that fateful day, but his spirit rose from his broken death knight corpse and escaped into the skies.[18]

After this defeat, the remaining death knights traveled to Shadowmoon Valley. The death knights, showing their allegiance, knelt before Gorefiend or whatever was left of him after his physical demise; in response, Gorefiend beheaded them (they rose once more, as the Ghostriders of Karabor). His spirit, however, became trapped and eagerly seeks a willing host to free him... 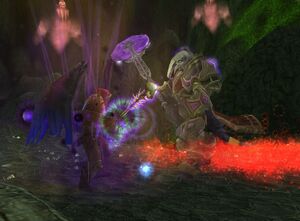 At the Altar of Shadows in Shadowmoon Valley, there resides an Ancient Shadowmoon Spirit, a ghostly orc who appears to be an expert on the history of Teron Gorefiend. After completing the early quests with the

[Spectrecles] in Wildhammer Stronghold (Alliance) or Shadowmoon Village (Horde), you are sent to the Altar of Shadows to speak to this orc ghost who does indeed know of Gorefiend.

The Ancient Shadowmoon Spirit sends you on a set of three quests to locate Gorefiend's regalia, items that he used in his "life", that may aid in locating him.

The locations of Gorefiend's Regalia 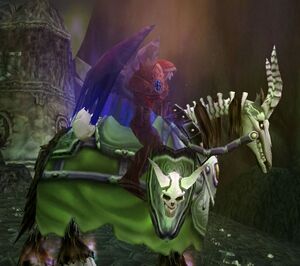 Gorefiend triumphant, preparing to ride to the Black Temple.

Two of the three items can be found at or near the walls of the Black Temple.

The Ancient Shadowmoon Spirit claims to be using the items to divine Gorefiend's location. Upon returning the items to the spirit, you find out the truth: the spirit IS Gorefiend, and he managed to convince you to return his gear to him.

After taking back his regalia, Gorefiend possesses your body, trapping your spirit in the Altar of Shadows. Upon being possessed, Karsius the Ancient Watcher, Gorefiend's ethereal draenei jailor, spawns, and the battle begins once you attack him. While you are possessed by Gorefiend, a small bar appears with Gorefiend's spells - Unholy Armor, Death Coil, Death and Decay, and Haste, powers he is seen to wield in Warcraft II. It is recommended that in the battle with Karsius, you use Unholy Armor and Death Coil as often as you are able, and Death and Decay periodically as well; Death Coil will heal you significantly and drain Karsius' HP.

After you defeat Karsius, you are freed, and Gorefiend mounts his undead steed and rides off towards the Black Temple, shouting that he has returned. With a heavy heart, you return to the quest giver in Wildhammer Stronghold or Shadowmoon Village, and are tasked with destroying Gorefiend (seeing as it was your actions that unleashed him).

Gorefiend found a place for himself within the Black Temple, which opened in patch 2.1. The reasons for Gorefiend joining Illidan — if he did so at all — were unclear, but he must have been at least tolerated by Illidan to have been allowed to remain in his fortress. He seemed to command the forces of the Shadowmoon clan from Gorefiend's Vigil.

Gorefiend was ultimately defeated by adventurers. He said the "wheel of death" had spun many times for him, and when struck down he remarked that the wheel was spinning again;[19] it remains to be seen if he will return once more. 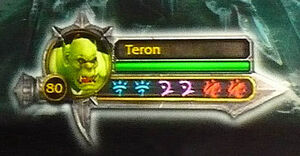 Death Knight runes as depicted in the 2007 BlizzCon presentation.