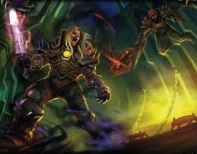 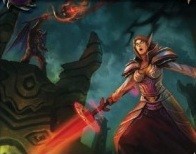 This article is about the in-game raid boss. For character biography and other appearances, see Teron Gorefiend.

Teron Gorefiend is a boss in the Black Temple. The fight is basically a DPS race, with a twist. Killing Gorefiend is a prerequisite for opening the door leading to Mother Shahraz. He's usually killed fourth when clearing BT.

Teron Gorefiend periodically marks a player with Shadow of Death, killing them instantly. The slain player then returns as a Vengeful Spirit, with the unique ability to hinder and destroy Shadowy Constructs that will otherwise decimate other players.

Only one single tank is needed, all other tanks should switch to DPS or Healing gear. The Gorefiend tank has to deal with solid melee damage. The usual mix of damage dealers and healers (6-8) is reasonable for this fight.

The whole raid needs the

[Cauldron of Major Shadow Protection] is also really useful. It's possible to wear some extra shadow resistance, but not much - it's a DPS race, not a battle for survival. Soulstones should be created pre-fight, but not pre-cast. They are needed for healers getting Shadow of Death.

Teron can be tanked right where he stands, and ranged DPS should group behind the MT opposite to the entrance. This gives the whole length of the room for the Ghost form players to kill the Shadowy Constructs.

Teron himself has a relatively low amount of health and must be killed as quickly as possible. It's fairly standard tank and spank, he's not tauntable, but a good tank can control him rather easily. As usual, melee DPS must stand behind him to avoid increasing his attack speed by parries. 3-4 healers should be able to keep the tank up, the other healers should take care of the massive damage the raid takes (this is another fight where

[Circle of Healing] are very effective).

Incinerate (the fire dot) must be dispelled as soon as possible, two Priests or Paladin dispellers should be predesignated.

[Heroism]) should be used as early as possbile after the tank has settled into an initial threat lead.

Every 30 seconds, a random raid member (not the person with aggro) receives this debuff. After 55 seconds, the debuff turns the player into a Ghost and spawns four Shadowy Constructs. The Constructs attack the raid, and usually cause a wipe if they succeed. Therefore, the Ghost player must kill them before they reach the raid, by kiting and nuking them with the Ghost abilities.

After the 60 seconds ghost phase, the player simply dies. Healers (ex. Shamans with an available Ankh) should get a Soulstone when they receive the debuff, so that they can resurrect at this point.

About 15–20 seconds before the debuff runs out, the affected raid member must move to the south end (as far away from the raid as possible). The first action after turning into a Ghost should be to AoE damage the Constructs with Spirit Volley (key '5'), move with the group and then AoE freeze them with Spirit Chains (key '4') as soon as the GCD allows. During the 15 sec cooldown, the Constructs must be nuked with Spirit Lance (key '3'), which damages and slows a single Construct.

This is the most difficult phase for the Ghost player - while slowly moving backwards towards the raid, all four constructs must be hit with Spirit Lance in turn to keep them all slowed and close together. Each Spirit Lance should hit a different target (either using the Tab key or mouse for targeting in a rotation). After 15 seconds, a second combination of Volley ('5') and Chains ('4') is available, after that the Constructs should have taken enough damage to die with 2-3 more Spirit Lances.

After the four Constructs are dead, it is a good idea to look for Constructs from the next player, and help kill them. If no Constructs are up, it's possible to move to the raid and buff a healer with Spirit Shield ('7'), and then get within melee range of Teron and attack him with Spirit Strike ('1').

Since learning the Kite'n'Nuke technique required for killing the Constructs may be difficult for classes which normally do not kite, and learning it under raid conditions is rather expensive (one wipe per try), it's a good idea if all raid members practice using the Teron Gorefiend's Shadowy Construct simulator before attempting him. The simulator is not a replacement for the real thing, but it gives players the general idea what to expect.

Do not try to exploit this encounter by disconnecting or hearthing out. Doing so immediately spawns the constructs with no friendly ghost to kill them. That is a wipe.

Some UI mods can lead to the Ghost form ability controls to appear at an unexpected location (or even not at all). When preparing for this encounter and using an action bar mod, it's a good idea to test whether the ghost controls are visible. The cheapest method to test this is the

[Battered Steam Tonk Controller], or a

Bartender, Bongos3, Dominoes all have an extra action bar called 'posses' bar, which is used when the player takes direct control over another entity. Players should configure their mod so that this bar is visible.

Classes which can remove themselves from combat can completely avoid Shadow of Death. By using

[Ice Block] during the cast time of Shadow of Death, players avoid getting the debuff, and Teron does not cast it again until 30 seconds later.

The ability must be used during the 1 second cast time. Teron regularly targets random players to use one of his abilities, but Shadow of Death is his only ability with a cast time. The targeted player needs to react very quickly. It may be useful to facilitate this with the following macro:

If players with these abilities do manage to avoid Shadow of Death, the raid effectively saves one entire Shadowy Construct cycle, which is a big boon.

Any players with pets should dismiss them before starting the fight, and those that can call temporary pets (such as mages' Mirror Image) should avoid doing so. This will prevent Gorefiend from casting Shadow of Death and turns the fight into an ordinary DPS race, one that most classes at level 90 should win with ease.

Intro
I was the first you know. For me the wheel of death has spun many times. <laughs> So much time has passed... I have a lot of catching up to do.

Aggro
Vengeance is mine!

Crushing Shadows
Give in!

Death
The wheel... spins... again.
The door to The Den of Mortal Delights has opened.