The Terrace of Endless Spring (or the Terrace of Eternal Spring)[1] is one of the three launch raids of World of Warcraft: Mists of Pandaria. It allows players to finally defeat the Sha of Fear, a "super super huge raid boss" who "has turned other local creatures into Sha",[2] after driving it out of the Heart of Fear. The raid is relatively small with four boss encounters: the Protectors of the Endless, a trio of Jinyu; Tsulong, a cloud serpent; Lei Shi, a water spirit; and the Sha of Fear itself as the final boss.

The raid is located at the midpoint of the Veiled Stair, a mountain pass between the northeastern corner of the Valley of the Four Winds and the southern part of the Kun-Lai Summit. The meeting stone and a flight path are located just down a short hill from the raid dungeon entrance, near the Tavern in the Mists deep within the Stair.

Emperor Shaohao performed the ritual to summon the mists and save Pandaria from the Great Sundering here.[3] After the emperor became one with the land, his staff Sheilun was found by Tian Monastery monks who brought it to the Terrace of Endless Spring for safekeeping, where it stayed for millennia.[4]

Straddling the mountain range between the Jade Forest and the Vale of Eternal Blossoms, the Terrace of Endless Spring has been a sacred refuge for millennia. Its peaceful fountains are said to have the power to heal and rejuvenate, but when the Sha of Fear attacked, many of the complex's guardians turned on each other in fits of terror.

The Terrace is attacked by the Burning Legion, but protected by the Shado-Pan.[1]

The Sha of Fear has fled to this tranquil haven to recover, corrupting the pure waters with its tainted blood.

The Terrace is an important sanctuary of Pandaria, blooming in peace for many years, it has been enveloped in horrible force by the area's single, most important prisoner, the terrifying Sha of Fear! Free the inhabitants of the terrace before taking on the amalgamation of fearful emotions. Raiders on a more heroic difficulty will have the chance to discover the birthplace of the Sha for themselves. 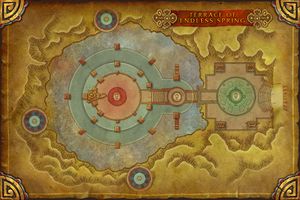 Progression through the terrace is literally straightforward. The Protectors of the Endless are found at the center of the starting floor and cannot be fought until the Sha mobs around them have been destroyed. After killing the protectors, Tsulong will fly down to the area, having been corrupted by the Sha of Fear. His encounter is started by attacking him.

After freeing Tsulong, the raid will move up to the watery platform and need to destroy the water elementals roaming around before Lei Shi materializes. Defeating Lei Shi redeems the playful water spirit, who will then travel to the Sha of Fear and dispel the fog around the Sha prime, enabling players to fight it.

There are three outer shrines accessible during the Sha of Fear fight on the outskirts of the terrace. On heroic, the Sha of Fear will spirit itself and the raid to a watery hell called the Dread Expanse.

All bosses have a chance (on all difficulties) to drop a

[Sigil of Power] or a

[Sigil of Wisdom] in addition to the listed loot for