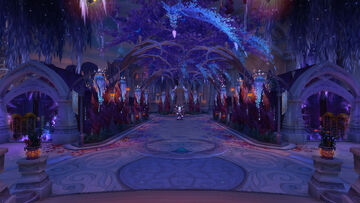 The Terrace of Enlightenment

The Terrace of Enlightenment is a large plateau located in the heart of the nightborne capital city of Suramar. The area sits in front of the Sanctum of Enlightenment and connects the Moonbeam Causeway in the east with the Concourse of Destiny and Terrace of Order in the west. The terrace is heavily patrolled by Duskwatch forces and, since the arrival of the Burning Legion, even demons.

A large tower containing a magical elevator stands on the terrace, and grants instant access to the upper levels of the Sanctum of Enlightenment. The canalway running through most of the city also passes underneath the Terrace of Enlightenment, continuing on through the nearby Terrace of Order. Despite its relatively central location in the city, the terrace appears to be generally off limits to ordinary citizens. The plateau also serves as the base for the Duskwatch's secret scrying efforts at the time of the Nightfallen rebellion.[1]

The Terrace of Enlightenment, along with the nearby Sanctum of Enlightenment, have served as a major base of operations for the Duskwatch, Suramar's main peacekeeping force. Specifically, these locations appear to be the focus of efforts for gathering information and conducting secret research, as indicated by both their names and many of the statues and inscriptions located there.

Members of the Duskwatch scrying

When the Burning Legion was granted access to Suramar City during their third invasion of Azeroth, the Nightfallen rebellion was begun by those who opposed this decision. Duskwatch security throughout the city, and particularly in areas such as the Terrace of Enlightenment, increased heavily as rebel activity erupted among the populace.

At some point during the rebellion, a covert scrying operation was established on the terrace, where many skilled Duskwatch mages and scryers began to monitor messages being transmitted magically throughout Suramar. This venture proved successful, and the disloyalty of Lady Ly'leth Lunastre, an important noblewoman and recently-elected advisor to Grand Magistrix Elisande, was subsequently uncovered. Ly'leth had acted as a double-agent for the resistance during her posting in the Nighthold, sending information and magically-encrypted messages to the Nightfallen leaders, which were intercepted. This in turn led to Ly'leth's arrest and detainment.[2]

As the final stages of the conflict began and the rebels launched a massive assault on the Nighthold itself, the Grand Magistrix succeeded in halting almost the entire insurgent army in a complex time lock. In the hope of gaining more information on how to counteract this, First Arcanist Thalyssra tried to find a way to restore contact with Ly'leth. Suspicious of the location, she and her allies subsequently raided the Terrace of Enlightenment and in doing so discovered its scrying operations. They also recovered intercepted messages from Ly'leth in which she warned them of Elisande's plans, and informed them of a hidden route to gain entrance to the Nighthold.[3]

"The Sundering Didn't Destroy The World. We Did!", "Fools! Night's Fallen On Us All!", and "This Deal's Getting Worse All The Time!".