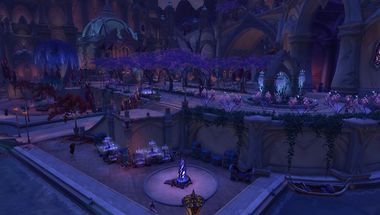 The Terrace of Order

The Terrace of Order is a spacious plateau located in front of the Sanctum of Order in the nightborne capital city of Suramar. Located near the heart of the city, it is an important meeting spot for the citizenry and a central location when travelling around Suramar. The entire promenade hosts a large contingent of Duskwatch security forces, with the attached Sanctum of Order serving as the entity's headquarters.

The plateau is connected to the Evermoon Commons district and Shimmershade Garden to the south, as well as the Concourse of Destiny and Terrace of Enlightenment to the east. The major canal running through most of the city flows underneath, making most of the terrace a bridge. A lower level under the main one follows the canal and hosts a number of alleyways and derelict storerooms.

Among the terrace's numerous functions, it has historically been used as a location to display prisoners and other enemies of the regime who an example is to be made of; as such, cages and magical prisons dot the area. This would eventually cause the Terrace of Order to become a battlefield in the eventual Nightfallen rebellion between insurgents and loyalists. 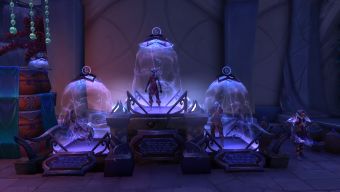 Detained citizens on the terrace

When the Burning Legion were granted access to Suramar City by Grand Magistrix Elisande and her allies, major unrest over the decision lead to the formation of the Nightfallen and the outbreak of the Nightfallen rebellion. This, in turn, led Suramar's authorities to crack down harshly on any signs of dissent among the populace. Arcwine, vital to the survival of a nightborne, was rationed within the city's poorer districts, while citizens suffered harsh and arbitrary punishments at the hands of the Duskwatch, Elisande's private army.

Many of those arrested or taken on suspicion of treason were put on display in magical cages on the Terrace of Order to send a message to their fellow nightborne. Within these prisons, many of the accused began to wither from lack of arcane energy, even if they had not already. The rebels frequently raided parts of the Terrace of Order to free as many of such prisoners as possible, though the area was patrolled heavily by Duskwatch and demonic forces.[1] At the time of the civil war, the terrace was also a popular relaxing and meeting location for many of those fervently loyal to Elisande's regime.

The nightborne Arluelle made her home in the abandoned storerooms of the terrace's lower level, along with many other withering vagrants, before being recruited to the Nightfallen rebellion and becoming one of its most prominent members.[2]

As the conflict progressed and the rebels managed to achieve more successes, Elisande chose to take drastic action. The Duskwatch, accompanied by demons, carried out a slaughter was carried out in the Starcaller Retreat, an area known for its Nightfallen sympathies.[3] Vanthir, the owner of the Waning Crescent tavern and a leader of the rebellion, was captured alive during the massacre and taken to the Terrace of Order to be made an example of. Slowly, he was allowed to wither in a large cage, guarded personally by Thoramir, the Second Blade of Elisande herself.

When the leader of the Nightfallen, First Arcanist Thalyssra, learned of the massacre at the Waning Crescent and Vanthir's subsequent capture, she and her allies immediately took action to locate and attempt to free their fellow insurgent. Before long, Thalyssra was able to triangulate Vanthir's essence and discover his location at the Terrace of Order.[4] A force led by Silgryn hurried to the terrace and confronted Thoramir and his guards. After succeeding in slaying the Second Blade, the rebels released Vanthir from his prison and gave him a fruit from the arcan'dor tree to prevent him from succumbing to his withered state.[5]

Before departing the scene, the Nightfallen agents left a sigil of a Dusk Lily (a notorious symbol of Thalyssra and her rebellion) over the now-empty cage to send a message to their enemies.[6] When the events that transpired on the Terrace of Order—and particularly the Dusk Lily—were discovered by Elisande and those in the Nighthold, it led to widespread anger, panic, and fear.[7]

"Theft by deception", "Conspiracy to commit treason", "Bribing an official", "Aiding and abetting a fugitive", "Possession of a controlled substance", or "Acts of vandalism".