Terran Up the Night 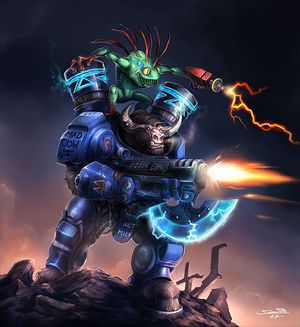 Concept art for the fictional "tauren marine" unit, depicting the tauren seen in the band's logo, marine-outfitted, joined by a murloc.

Terran Up the Night is the fourth song by Level 80 Elite Tauren Chieftain, which made its live debut on August 4, 2007 at the year's annual BlizzCon. It was written about the glorification of the terran race, of the StarCraft universe. To promote the song, Blizzard art director and L80ETC vocalist Samwise Didier created concept art for the fictional tauren marine StarCraft unit, which depicted the tauren seen in the band's logo, refitted with a terran marine's uniform. T-shirts featuring this tauren marine, along with lyrics from the chorus of Terran Up the Night ("Not protossin', not zergin', / I'm terran up the night!") were also sold at the event. The words "Udder Chaos" can also be seen in the tauren marine concept art, possibly hinting that this song "appears" on Level 80 Elite Tauren Chieftain's fictional 2007 album, Udder Chaos.

The studio version of the song appears in Starcraft II: Wings of Liberty, both as a jukebox track and during the ending credits.

The song is available on the album Revolution Overdrive: Songs of Liberty, which was available at BlizCon 2010. It is also available for purchase on iTunes.