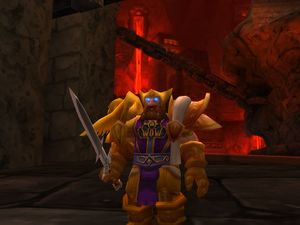 To celebrate the launch of the Honor System, Blizzard issued a Test of Honor Contest. This took place in both WoW USA and Europe from April 25 to May 24, 2005.[1]

They gave away top-of-line NVIDIA® 6800 series graphics cards and other prizes to lucky participants that took part in player-versus-player combat; however these prizes were only applicable for the USA contestants.

Everyone that participated in player-versus-player combat from the time it was patched into the game until the contest ended on May 24th 2005 had a chance to win prizes; ranging from NVIDIA graphics cards to free WoW gametime. The higher your ranking in the Honor System on May 24th, the better your chance of winning. However, anyone that participated had an opportunity to win something.[2]

In addition, the player with the most earned Honor points from each faction on every realm during the contest period were awarded a