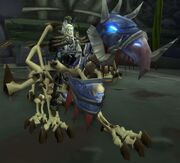 Dread Commander Thalanor is a high ranking member of the Knights of the Ebon Blade situated in Acherus: The Ebon Hold. He was a Farstrider who died to Arthas Menethil and the Scourge during the invasion of Quel'Thalas, dying right outside Deatholme early into the invasion.[1] He sells

He first appeared as Scourge Commander Thalanor and ordered death knights to descend to the Scarlet Enclave to wreak destruction.

Thalanor visited Dalaran to bring the Deathlord back to the Ebon Hold above the Broken Isles.

He is later seen in Deliverance Point on the Broken Shore.

The subject of this section did not make it out of the beta stages of World of Warcraft: Wrath of the Lich King.