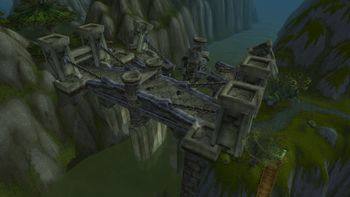 The Thandol Span is a massive bridge located in an area once known as the Thandol Valley. It is one of the greatest engineering projects ever completed by the dwarves, having been under the guard of the Anvilmars for at least three generations.[1]

An alleged Deed to Thandol Span can be found in the Relic Coffers in Blackrock Depths, however the legitimacy of this deed is questionable.

After the War of the Three Hammers, the dwarves of Ironforge sought to retain relations and trade with their Aerie Peak cousins. Then, the Thandol Span was built; its two massive arches bridging the gap between Khaz Modan and Lordaeron. Prosperity was gained by the two dwarven kingdoms as a result of mutual trade.[2]

The bridges were capable of supporting the weight of entire armies, and served as the main route of trade between the dwarves and humans. The orcs lost the battle for Lordaeron and Anduin Lothar kept pushing the Old Horde out of the continent to Khaz Modan through the Thandol Span. 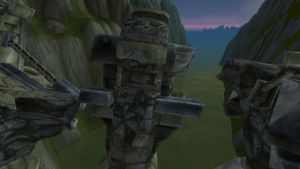 The broken part of the Thandol Span.

The mighty bridges recently suffered heavy damage due to a Dark Iron attack planned by Kam Deepfury and Balgaras the Foul. One of the two bridges was all but destroyed, and dwarven forces fought fiercely to defend the last remaining bridge and retake the nearby town of Dun Modr. During this assault many dwarves died, including Sully Balloo, Ebenezer Rustlocke, and the brother of Longbraid the Grim.[3][4] 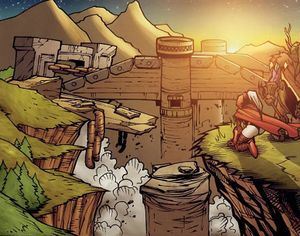 Thandol Span in the comic.

Thargas Anvilmar, Varian Wrynn, Broll Bearmantle, and Valeera Sanguinar assaulted the Dark Iron dwarves of Thandol Span in order to rescue their captured comrade, Hjalmar Anvilmar. Though Hjalmar didn't survive, his sacrifice saved the last remaining bridge of the Span from annihilation. With King Magni's dwarven reinforcements and the death of the Dark Iron leader, Balgaras the Foul, the company of heroes were able to drive away the Dark Iron invaders from Thandol Span and reclaim it for the Alliance.[5]

The Dark Iron dwarves abandoned their small encampment near the Span, which became home to a friendly Dark Iron Entrepreneur who sells uncommon quality items. In addition, the Dark Iron dwarves who were residing within the Span and Foggy MacKreel left. Alliance adventurers teamed up with Thargas Anvilmar in annihilating the Twilight Hammer threat of Dun Modr.

This massive, dwarf-made bridge stretches across the natural canal that separates Lordaeron from Khaz Modan. The Thandol Span is solid and large, a blocky stone edifice with numerous thick support columns plunging into the water. Scourge forces damaged the bridge in the Third War. Great sections broke off and now lie beneath the waves, some visible at low tides. Nevertheless, the Thandol Span is still easily navigable and serves as the only land route between Lordaeron and the southern continents.[6]