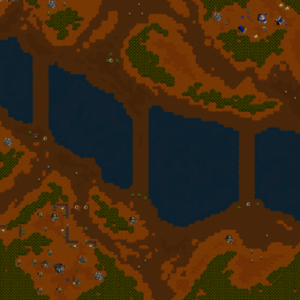 The Thandol Valley region during the Second War.

Thandol Valley is the name of the region surrounding the great bridges of the Thandol Span. These bridges passes through the natural canal that separates Lordaeron from Khaz Modan.

Following their defeat at Dun Modr, the orcs were forced to retreat south, across the Thandol Valley to a secondary outpost at Dun Algaz. Anduin Lothar, hoping to push the orcs even further back into Khaz Modan, ordered the destruction of the outpost.[1]