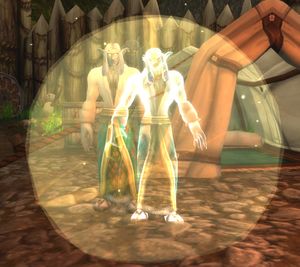 Thanthaldis Snowgleam is a level 58 PvP rewards vendor located outside the Alterac Valley entrance in the contested territory of Hillsbrad Foothills. He is the Stormpike Supply Officer for the Alliance. He was present during the Legion Invasions.

During Warcraft's Anniversary he became time-displaced and his stock would scale up to ilvl 380 at level 120.

Greetings, <race>, my apologies for being a little out of sorts today, but I still guarantee my wares will stand the test of time.

Let me look at what you have to offer.