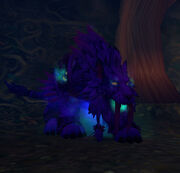 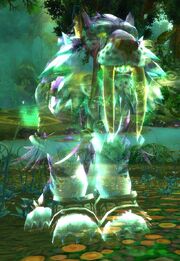 Thaon in the Emerald Dream.

Thaon Moonclaw is a quest giver located at Moonclaw Vale in Val'sharah. He is one of three ancient Archdruids of Val'sharah.

Thaon fought in the War of the Ancients, during which Thaon attempted to kill Xandris the Dishonored for betraying and accordingly slaughtering many of their fellow comrades, but Xandris fled when the satyr saw him.[2] It would be 10,000 years later before they crossed paths again. After the war Thaon advocated that the surviving satyrs the night elves had rounded up should all be killed, but he was overruled and they were put into a sleep beneath Shaladrassil instead.

Years later during third invasion of the Burning Legion when Moonclaw Vale comes under attack Thaon enlists the assistance of an adventurer to save his grove before he will leave to aid Cenarius. Together, they exact vengeance on Xandris the Dishonored, but Thaon afterwards leaves Kagraxxis the Corruptor to be dealt with alone by the adventurer, having sensed an even darker presence that requires his personal attention.

The "darker presence" is revealed to be Xavius, Nightmare Lord of the Emerald Dream. When the adventurer catches up, the Image of Xavius gloats that although the archdruid had put up quite a fight, he now belongs to Xavius. With there being no other choice, the adventurer is forced to kill Thaon at the Den of Claws.

After Xavius is killed, Thaon's spirit is found within the Emerald Dream.

Master Moonclaw! What has become of your grove?

After the War of the Ancients, the surviving satyrs were assembled together. I argued to execute them for their transgressions, but our merciful nature won the day. I was overruled.

Instead, the satyrs were placed in an eternal sleep deep below the roots of Shaladrassil. Now, somehow, they have awoken.

We shall not make that same mistake again, if I must kill them all myself!

They should have listened to me from the start and destroyed all the satyrs before this could happen.

I thank you, <Name>, for releasing me from the madness of Xavius.