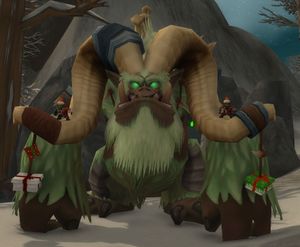 The Abominable Greench is a level 103 elite yeti that resides in the snowy region of the western peak of the Alterac Mountains. He only appears during the height of winter and probably lives on a seasonal hibernation cycle. When he does appear, however, he must satiate a savage hunger and constantly scrounges for food. He is known to attack travelers passing through the mountains, taking their entire food supply. Since the employees of Smokywood Pastures make use of the mountain routes to transport their goods, they are often hindered by the Greench's annual awakening and lose some amount of their rations to his voracious appetite.

During the 2011 Feast of Winter Veil event, he has captured Metzen the Reindeer with the aid of his Rotten Little Helpers.

[Stolen Treats] will appear near the cave and Metzen the Reindeer will be freed.