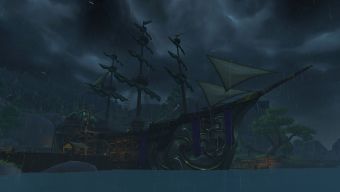 The Abyssal Melody at Port Fogtide

The Abyssal Melody is a Kul Tiran battleship moored at Port Fogtide in Stormsong Valley. Under the command of House Stormsong, the ship would be turned to dark purposes at the time of the Fourth War, as the House and its Tidesages became overtaken by dark whispers from the deep. The result was the ship being used as the site for dark rites, in which Kul Tirans (both willing and not) were ritually transformed into k'thir on the orders of Lord Stormsong and supervision of Brother Halsey.

While its sister ship was achieved its purpose and sailed directly into the Shrine of the Storm, the Abyssal Melody came under attack from resistance fighters belonging to the Storm's Wake. Led by Brother Pike, this militia succeeded in interrupting the rituals on board the ship,[1] as well as in Tidecross, and used storm magic of the Tidesages to blast the Abyssal Melody apart.[2]