From Wowpedia
(Redirected from The Battle of Darrowshire)
Jump to: navigation, search

“Do not lose hope, Darrowshire! We will not fall!”

— Davil Crokford rallied the defenders during the battle

The Battle of Darrowshire[1] was a conflict which occurred as part of the Third War in Lordaeron between a united force of humans, and a large army of Undead Scourge, over the fate of the human village of Darrowshire.

When the Scourging of Lordaeron began and the undead armies of the Lich King proceeded to sweep across the Kingdom of Lordaeron, the village of Darrowshire became cut off from the remainder of the forces of the Alliance of Lordaeron. As it became further threatened by the arrival of Scourge forces, a unified defense force was established to protect the settlement and its inhabitants. This force was a combination of Lordaeron troops, paladins of the Silver Hand, and a thrown-together group of militia led by Captain Joseph Redpath.

Although Darrowshire's defenders were successful in repelling major undead attacks, and even slaying one of their leaders in the form of the ghoul lord Horgus, the tables turned on them when, during the battle, Captain Redpath's spirit was torn loose from his body by the death knight Marduk the Black. Having had his spirit twisted and corrupted by the death knight's black magics, Redpath spread his taint to the other humans. The defenders, now under the sway of the Scourge, turned on Darrowshire and promptly slaughtered all of its residents.

In the wake of the battle, the remaining Scourge forces and the corrupted defenders left the ruined village behind and pressed on to continue to ravage the once-mighty kingdom, adding to the Scourge's assault on the living.[1]

When the Scourging of Lordaeron began, many citizens of the Kingdom of Lordaeron were infected with the Plague of Undeath, transforming them into undead minions of the Lich King. As this army of Scourge began to grow, it started to threaten many of the Kingdom's major settlements. The breaking point, however, proved to be the return of Prince Arthas Menethil from Northrend, at which point he slew his father the king, and unleashed the waves of restless undead on the remainder of the realm.

As Scourge armies swept across Lordaeron, numerous villages and settlements were overwhelmed. Eventually, the town of Darrowshire, located in the east of the kingdom, was cut off from the rest of the forces of the Alliance. Although now isolated, the village was not defenceless. A company of troops from Lordaeron's standing army arrived to bolster the town and this, along with the formation of a militia of Darrowshire's residents led by Captain Joseph Redpath, led to the settlement becoming a bastion of regional resistance against the undead onslaught.[1]

As Darrowshire's defenders prepared to protect the town and its inhabitants for as long as required, the Scourge launched its first attacks. These initial attacks proved to mainly consist only of dispersed groups of shambling skeletons and corpses, which were quickly repelled. Soon, however, the undead began to launch more determined assaults. A large second wave, mainly consisting of powerful ghouls and led by the ghoul lord Horgus the Ravager, emerged in large numbers from the hills and charged into the forces protecting the town.

As Darrowshire's defender began to become overwhelmed, they were relieved by a contingent of paladins of the Silver Hand, who set out for the town upon hearing of the imminent attack. Led by Davil Crokford (a native of Darrowshire) the paladins' efforts succeeded in steadying the line and holding back the undead. Soon, responding to this turn of events, Horgus himself entered the fray and clashed with Crokford on the battlefield. After a heated and lengthy engagement, the paladin managed to slay the ghoul lord, but suffered mortal wounds in return and perished soon afterwards.[1]

Despite the deaths of Horgus and Crokford, the battle continued to rage on, with Captain Redpath taking over the role of leader as he led his militia bravely. At this point, however, the undead leader in the form of the death knight Marduk the Black approached Redpath in the midst of the fray and proceeded to magically tear the human's spirit from his body. Using his dark powers, Marduk then twisted and corrupted his spirit into a monstrous shadow of the former captain.

The corrupted captain then spread the taint to most of the other defenders, transforming them too into minions of the Scourge. Their will no longer their own, the troops who had fought so hard to preserve Darrowshire now fell upon it in a twisted frenzy. They proceeded to slaughter all of the village's inhabitants, many of whom sought refuge inside their homes.

Once the fighting and massacre had concluded, Marduk and his army left the ruined village, taking Horgus's head with him. The victorious forces tore into the rest of Lordaeron, continuing the Lich King's war on all who lived.[1] 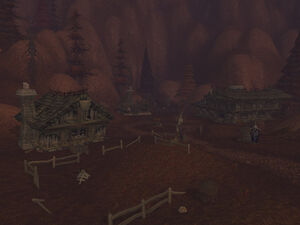 Darrowshire ruins in the Eastern Plaguelands.

In the wake of the battle, Darrowshire was left utterly in ruins; only ghosts and rot remained. Those who had fallen in defense of the village were raised as ghouls and spread across what would become the Eastern Plaguelands, their spirits trapped in the rotted forms.

Redpath the Corrupted was eventually defeated at Gahrron's Withering in the Western Plaguelands, east of Andorhal, his shield discarded at the barn there. Marduk survived, though his blade was shattered in combat with a dwarf captain near Corin's Crossing. Today, he resides in the Scholomance, deep beneath the ruins of Caer Darrow.

Chronormu, a bronze dragon disguised as a gnome named Chromie eventually traveled to Andorhal, where the Scourge began conducting experiments that tampered with time. Seeking to potentially save Joseph Redpath, Chromie dispatched adventurers to gather relics of the battle and somehow recreate it, but to have it end in a somewhat different fashion that would allow Redpath to be redeemed.[2]