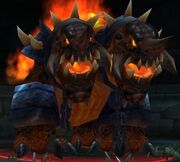 The Beast is a core hound boss found at the Furnace in Upper Blackrock Spire. This minion of Ragnaros was captured by Nefarian's forces, tortured for their amusement, and then retrained to guard the spire from intruders.

One such intruder, Finkle Einhorn, was swallowed whole by the Beast in the pits at the Molten Span. With the protection of his lava-proof suit, the gnome remained in the belly of the Beast for some time (varying from "months" to "the better part of a month"), and he can be freed by skinning the Beast.

Finkle was rescued by some adventurers.[1]

Nefarian's dragonkin take obscene delight in the barbaric torture of Ragnaros's captured minions. Despite suffering unimaginable agony, one core hound remained lucid enough to be retrained, and his ferocity makes him an ideal guard in the upper levels of Blackrock Spire.

A tank will need to keep aggro on the Beast at all times, as he hits extremely hard and can kill a cloth wearer in two or three hits. It may be necessary to use multiple tanks to hold aggro consistently through Terrifying Roar and Berserker Charge. Otherwise, as long as the group has sufficient healing, the fight should be a simple one.

In order to free Finkle and have a chance at

[Pristine Hide of the Beast], the group will need a member with 310 skinning. Since the maximum in Classic is 300, this means that the skinner must have either

[Finkle's Skinner] (from the Beast itself) or

The Beast appears as a legendary card in Hearthstone. Upon death, he summons Finkle Einhorn for the opponent. His flavor text reads: "He lives in Blackrock Mountain. He eats Gnomes. That's pretty much it."