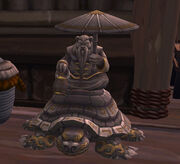 found outside leaning against a basket on the northeast side of Stone Mug Tavern in Stoneplow, Valley of the Four Winds

The famed pandaren explorer Liu Lang was born and raised here, in Stoneplow, on a small ranch near this very spot.

While he should have been helping to manage the family farm, Liu Lang often wandered to the cliffs south of here and stared out across the ocean. "I want to see what's out there," he famously declared to the derision of his peers (it was widely assumed the world had been destroyed in the Sundering.)

Liu Lang made inquiries about purchasing a boat, but local Anglers pointed out no boat could find its way home through the mists.

He later proclaimed he would explore the world on the back of a sea turtle, because sea turtles always return to the beach where they were born.

Afterwards, locals began to suspect that Liu Lang had eaten one too many bad turnips, and was no longer right in the head.