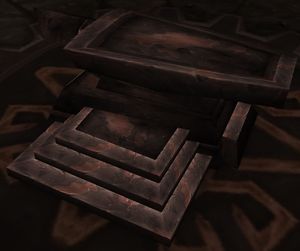 The Black Anvil is a large anvil in the center of Shadowforge City in Blackrock Depths. Guarded by Lord Incendius, this anvil is required to craft all Dark Iron items.

It is made up of only the purest Dark iron, smelted and refined with secrets only revealed to the Dark Iron clan's most trusted miners and blacksmiths.[1] The clan considers the anvil to be sacred.[2] 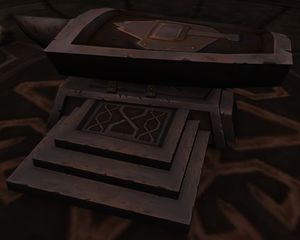 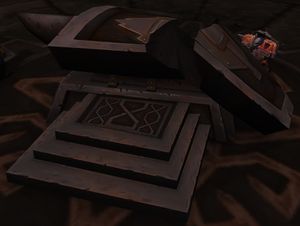 The Black Anvil after the Venture Company attack.

While the Dark Iron dwarves were experimenting with Azerite on the anvil, Shadowforge City was attacked by the Venture Company who destroyed the Black Anvil and stole Ironfoe. Alliance adventurers recovered the dwarven artifact after defeating Mogul Razdunk in the MOTHERLODE!!. The Black Anvil was then repaired using a Fragment of the Molten Core charged with the elemental power of the Firelands and a vast quantity of dark iron, as well as being infused with Azerite.[3]

Items to be crafted

The following items may only be crafted at the Black Anvil:

It is possible to craft several of these items without defeating Lord Incendius. It takes him several seconds to circle the anvil. If timed correctly, you should be able to finish crafting an item before dying.