From Wowpedia
(Redirected from The Blue Recluse)
Jump to: navigation, search 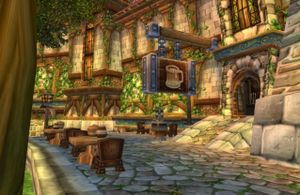 The Blue Recluse as seen from the outside. 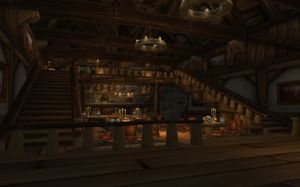 The Blue Recluse's inside.

The Blue Recluse is a tavern in the Mage Quarter of Stormwind City. Sometimes monsters can be found there who are spawned during the Investigate the Blue Recluse quest.

According to Thassarian, this inn is known for its food, drinks and good conversations. It's also renowned around the world for its apparent classy atmosphere.[1]

While not being mentioned by the guards as being one of the most popular inn, it certainly has the most reputation in the entire city. Many hunters come here for a drink just like Hemet Nesingwary, he came here once and told the story to Flint Broadshot of how he found himself guarding three Frostsaber cubs from unscrupulous human hunters in Winterspring, which earned him his fame. Thassarian, the first Death Knight to rejoin the Alliance also came here to have an ale as soon as he spoke with King Varian.