The Book of Ur 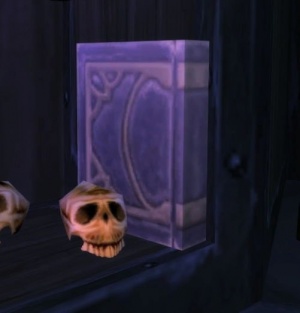 "The Book of Ur" is a book written by the mage Ur of Dalaran. It came later into the hands of archmage Arugal, and was available as an in-game book.

The Book of Ur was located in Shadowfang Keep in Silverpine Forest.

This item is was an objective of

The Book of Ur

This is the purpose of my book: to catalogue those beings, those otherworldly fiends who would destroy our lands, so that explorers who happen upon them will know what they face. So if you consider yourself a guardian of Azeroth, then read on. And know your enemy.

-Ur
Mage of Dalaran

The fiend of which I write is the Worgen. Old, rural folklore may hearken to these creatures. For what farmer's child has not heard tales of beastly wolf-men stalking the fields and marshes outside his village? And truth may hide in such tales--perhaps they are warnings against the Worgen, veiled as myths to frighten us. But before such tales are dismissed, let me now assure the reader: Worgen are real. They may not be from our world, but avenues exist between their home and ours and powerful magic can pull them here. Such chants are best left unuttered. For where ever the Worgen tread, they bring terror and bloodshed with them.

You will know the Worgen by its resemblance to the wolves of our world. When viewing a worgen one can easily see its coarse hair, pointed ears, and long snout are akin to the wolves we know. But you will just as quickly see its differences: that coarse hair surrounds a powerful, two-legged body sporting long fangs and dagger-like claws. And behind it's howl lurks a malevolence possessed by no natural beast.

The worgen's home is a dark place, a place of nightmare. If that world fosters locations safe from the cursed Worgen, then my research has revealed no such bastions. And if one considers the ferocity and wickedness of the Worgen, it is likely that no such bastions exist. It is surmised that the Worgen are content to remain on their world, for although some Worgen possess powerful magic, they have made no attempts to reach Azeroth of their own accord. And for this, we are fortunate.

As mentioned above, some Worgen are skilled in the mystic arts, and their magic is of darkness and corruption. Curses and supernatural poisons are common, so be forewarned--those who face the worgen should arm themselves with wards against shadow.

It is my hope that no Dalaran wizard seeks out the Worgen, even if done in light conscience. For no pact may be struck, no secrets may be learned, no good can come from these beasts. They are best left to their world. For if found in ours and not destroyed, our peril will be dire...