The Book of the Raven (quest) 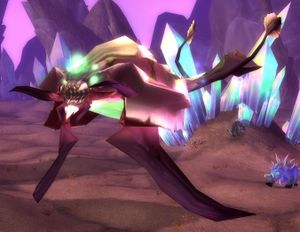 Get an Aether Ray Eye first 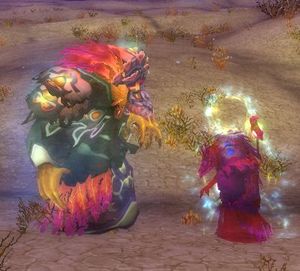 The Book of the Raven is part of the Swift Flight Form quest chain.

[Aether Ray Eye] with your

[Seer's Stone] to reveal the raven cult ghosts. Search the Vortex Pinnacle for the spirit of Sai'kkal the Elder and question him about the book of the raven, then return to Arthorn Windsong.

From what you've told me, Morthis's suspicions seem plausible, but we need confirmation.

In his research, Timeon has uncovered clues that a "book of the raven" served as an ancient scripture to the cult.

The arakkoa spirits will not reveal themselves to your eyes. Take this stone with you to the high peaks in the western part of Blade's Edge, to the south of Raven's Wood, obtain an aether ray eye, and combine them to augment your sight. Search for the ghost Timeon identified as Sai'kkal the Elder.

<Arthorn looks at you hopefully.>

Were you able to track down any information about the book?

Isn't it amazing that even among arakkoa, the cultists were considered heretics? That the traditional priests hated them enough to destroy their holy text is incredible! We must get our hands on that book, <name>.

It's the key to unraveling the mystery of the raven god and preventing him from taking over the Emerald Dream.

Perhaps Morthis will finally agree to take me as a student if we succeed!

The Aether ray eye drops readily, and gives you a 5 minute buff that lets you see the spirits. There are a number of spirits wandering around Vortex Pinnacle. The ones that are not Sai'kkal will give you a clue to his location.

Once you find him (he is just east of Ogri'la), you will have a discussion with him:

<The arakkoa ghost reaches out toward you as though to try to identify you. You get the impression that it cannot see you clearly.>

Forgive me for questioning you, my son. My sight isn't what it once was, but the raven has blessed me with a long life.

Soon it will be time for you to take my place. I have taught you all I know. My only regret is that I didn't prove worthy enough to recover our sacred Book of the Raven.

Yes, elder. Tell me more of the book.

The true believers have lived in shame since the day our treacherous cousins in Skettis stole the book from us, shattered its tablet, and buried the fragments in their wretched city!

Pray that the raven will choose you to restore it, my son. Be faithful and remember always the prophecy, "From the dreams of his enemies shall the raven spring forth into the world."