The Broken Isles is chapter 2 of the Terror of the Tides campaign.

It was an engagement fought between Maiev Shadowsong's Sentinels and Illidan Stormrage's Naga, in the wake of Illidan's escape from Kalimdor and his raid upon the Tomb of Sargeras.

The next day, on the shores of a mysterious island chain, Maiev and her Watchers inspect some ancient, yet strangely familiar ruins.

After his consumption of the Skull of Gul'dan and his resulting banishment from Night Elf realm, Illidan was approached by Kil'jaeden and offered a chance to redeem himself in the eyes of the Burning Legion; destroy the Lich King, and the arch-demon promised to grant him all the power he could possibly wish for. Aware that such a task would require strong allies, Illidan summoned Lady Vashj and her Naga from the depths of the ocean, and with their help made good his escape to the Broken Isles. Here he began his search for a powerful artifact known as the Eye of Sargeras, with which he could destroy Ner'zhul once and for all.

However, despite the Naga rearguard's best efforts the Warden Maiev Shadowsong with her lieutenant Naisha managed to tail the Demon Hunter across the ocean with a small force of Sentinels. Landing upon islands not shown on any of the Night Elves' charts, Maiev realised to her shock that she had arrived in the ancient city of Suramar, sunken beneath the waves thousands of years ago. Pondering upon this she and her companions began to search the islands for signs of Illidan.

Illidan and his forces are based somewhere on this chain of islands. Hunt him down and put an end to this chase.

The Betrayer has escaped into the Tomb of Sargeras, and you must follow. To gain entrance, you must eliminate Illidan's Naga minions from the Tomb's entrance.

Drak'thul is haunted by the ghosts of his betrayed comrades. You must find and destroy the pits from which the ghosts spawn. Within one of them lies the artifact that first raised the Orc remains. Bring the artifact to Drak'thul to show him that the curse has ended.

On the coast of the Broken Isles...

Naisha: Mistress, we followed Illidan's course due east as you asked, but these strange islands do not appear on any of our maps.

Maiev Shadowsong: I suspected as much. These islands must have been formed only recently.

Naisha: What makes you say that?

Maiev Shadowsong: The ruins all around us, Naisha... I recognize them.

Maiev Shadowsong: This was once the great city of Suramar, built before our civilization was blasted beneath the sea ten thousand years ago.

Naisha: But how could... Are you suggesting that these islands were somehow raised from the seafloor?

Maiev Shadowsong: Perhaps, though there are few powers left in the world capable of raising islands from the deeps. Regardless, it's a mystery we'll have to solve later. We'd best head inland and set up a base camp. Once we're situated, we'll pick up Illidan's trail.
In a clearing a bit further inland...

Maiev Shadowsong: Here, sisters. Let's establish a base so we can continue our hunt for Illidan.

Naga: Night elves! Kill them all in the empress' name!

Maiev Shadowsong: I remember this place. It was once the great Library of Izal-Shurah. There is no knowledge left here only nightmares and the shadows of regret.

Maiev Shadowsong: Great trees once stood in this place, twin aspens called the Boughs of Azshara. To look upon them was to know true peace, true fulfillment. Now they are gone, along with their hopes and dreams of a generation.

Illidan is seen standing in front of the entrance to the Tomb of Sargeras along with a group of naga warriors.

Illidan Stormrage: At last! The Tomb of Sargeras is found!

Illidan Stormrage: You, my trusted servants, must remain here and guard the entrance. If that wretched warden managed to reach this island, she'll certainly try to follow us.

Naisha: Illidan! I knew we'd find him! We'll have to fight our way through the naga's defenses in order to follow him!
Illidan transforms into demon form and blasts open the tomb's gate to enter the building.

Maiev Shadowsong: We locked Illidan beneath the earth long ago. I intend to do so again.

Maiev Shadowsong: An orc! I smell the stench of demons about him.

Drak'thul: Rest easy, stranger. This old wanderer has no quarrel with you or your kin. I am Drak'thul, once a powerful warlock of the Stormreaver clan. Now I am the last of my kind.

Maiev Shadowsong: What are you doing here?

Drak'thul: Your pardon, lady, but I am hunted by restless ghosts. They've chased me day and night for nearly twenty years. Perhaps if you silence them for me, I will tell you my tale.

Maiev Shadowsong: There--those must be the ghosts the old orc spoke of! They seem to be re-living their last battle. They're every bit as brutal and bloodthirsty as they were in life.

Maiev Shadowsong: The dead will trouble you no more, old orc.

Drak'thul: Thank you, stranger. Now, hear my tale. Nearly twenty years ago, the great warlock Gul'dan raised these islands from the deeps. He sought to unearth an ancient vault that held the remains of the Dark Titan.

Maiev Shadowsong: Sargeras! You speak of the Legion's creator!

Drak'thul: The same. After Sargeras' defeat, ages ago, his remains were locked away in an undersea tomb. Gul'dan believed that opening the tomb would grant him the Dark Titan's power. For his pride, he and the rest of our clan were torn to shreds by crazed demons.

Drak'thul: I have wandered these isles ever since, haunted by the ghosts of my slaughtered comrades.

Maiev Shadowsong: Your tale is as intriguing as it is dire, Drak'thul. It's a shame your ghosts lie silent. You deserve far worse than their company for what you set loose in this place.

Maiev Shadowsong: Now quickly, my sisters! llidan must be stopped at all costs!
Maiev and her forces quickly enter the tomb.

After safely establishing a base camp Maiev and her Watchers began exploring the island, other than a band of murlocs in the nearby ruins and some scattered sea giants the island was largely uninhabited. After a while the Naga began to attack the camp in groups from west and north, but they were easy prey for the Ancient protectors and skilled archers waiting in the camp. Marshalling enough troops for a counter-assault, Maiev enlisted the aid of Goblin shipbuilders to take the battle to the enemy.

After eradicating the western naga camp and setting up a secondary base and set sail for the northern isles Maiev stumbled upon the ancient library of Suramar, she recovered the few undamaged tomes she could find and continued onwards to the final naga fortification in front of a massive structure. Making her way past the serpentine defenders to catch a glimpse of her prey as he shattred the gates and disappeared into the temple-like structure. Slaughtering the remaining naga, Maiev brought a contingent of warriors with her as she entered through the gates.

Shortly after they made landfall Maiev discovered an ancient Orc by the name of Drak'thul. He told Maiev that if she silenced the ghosts which had been tormenting him now for many years, he would tell her his tale. Maiev did so, halting a never-ending battle between the skeletal remains of the Stormreaver, Blackrock and Twilight's Hammer Clan, and Drak'thul told the Warden how Gul'dan had raised the islands twenty years previously in order to claim Sargeras's powers for himself. Instead, he found death at the hands of the demons which guarded the Titan's tomb. Maiev was outraged by this information, and told Drak'thul he deserved a far worse fate for his part in the evil necromancer's scheme than the one the Fates had bestowed upon him. Drak'thul quietly agreed. 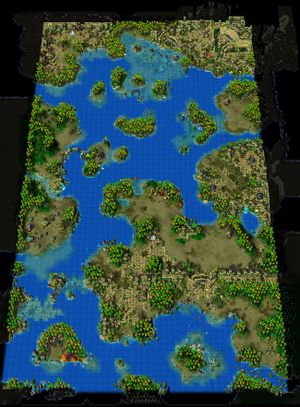