From Wowpedia
(Redirected from The Brothers Stormrage)
Jump to: navigation, search

The Brothers Stormrage is the final chapter of the Terror of the Tides campaign.

It was a battle that took place between the brothers Stormrage, who both wanted to rescue Tyrande Whisperwind from the clutches of the Scourge, and the Undead.

Hours later, along the banks of the River Arevass, Malfurion and Illidan work together to pick up Tyrande's trail. Moving quickly through the woods, their skills and senses start working in unison--their twin wills bent on finding their beloved priestess before it's too late.

Illidan Stormrage: "Prince Kael'thas said he last saw Tyrande being swept down this river. If she is alive, my naga will find her."

Malfurion Stormrage: "They had best return with good news, brother. The very sight of them makes my stomach turn. Where did you ever find such loathsome creatures?"

Illidan Stormrage: "Believe me, brother, you do not want to know."
A naga myrmidon slithers up to Illidan.

Naga Myrmidon: "Lord Illidan, we have found your missing priestess. She and her warriors fight on against the undead, but I doubt they can hold out much longer."

Tyrande Whisperwind: "Come forth, you mindless wretches, and taste the wrath of the Sentinels! Elune's light shall never falter!"

Naga Myrmidon: "You'd best hurry if you're to save her!"
A large force of gargoyles, frost wyrms, and sky barges are seen flying through the sky.

Illidan Stormrage: "An undead strike force! But they're completely ignoring us! What could--"

Illidan Stormrage: "Their flying horrors fill the sky! It would be folly to send your flyers against them!"

Malfurion Stormrage: "We cannot depend on them now! Illidan, you must hold the undead here and prevent them from assaulting Tyrande's encampment. I will journey downriver and--"

Illidan Stormrage: "No, brother. The naga and I can reach her faster! I will go."

Malfurion Stormrage: "What you say is true, but I risk much by trusting you, Illidan."

Illidan Stormrage: "I swear on my life that I will bring her back, my brother."

Naga Myrmidon: "Lord Illidan, we've discovered a dam blocking one of the river's tributaries. The dam is guarded by forest trolls, but the stream beyond it might provide us a faster route to your friend."

Illidan Stormrage: "We shall see."

Tyrande Whisperwind: "Illidan! What trickery is this? Have you come to finish me off personally?"

Illidan Stormrage: "No, Tyrande. You must believe me. I've come to save you!"

Tyrande Whisperwind: "Save me?"
Illidan begins opening a portal. Meanwhile, at the night elf base...

Malfurion Stormrage: "Where could they be? He should have brought her back by now!"

Illidan Stormrage: "Hurry! This is our last chance!"
Illidan and Tyrande head through the portal just before it closes and arrive near Malfurion's base.

Tyrande Whisperwind: "You... risked your life for me. I don't understand."

Illidan Stormrage: "Whatever I may be--whatever I may become in this world--know that I will always look out for you, Tyrande."
Malfurion arrives at the scene.

Tyrande Whisperwind: "I knew you would not forsake me!"

Malfurion Stormrage: "I thought I'd lost you forever, my love. If not for Illidan's aid, I may well have."

Illidan Stormrage: "We have had much strife between us, my brother. I have known only ages of hate for you. But, for my part, I wish it to end. From this day forward, let there be peace between us."

Tyrande Whisperwind fell in the River Arevass when holding back a horde of approaching undead on a bridge, Tyrande was washed away by the river deep into Silverpine Forest.[2]

Maiev reconvened with Malfurion and told him that she had seen Tyrande "torn apart with my own eyes". Driven mad with grief, Malfurion led a furious assault upon Illidan at the Ruins of Dalaran after having seen a vision from the local spirits that would destroy the world if not stopped. Illidan was defeated and lamented his loss. Before Maiev could execute him, Illidan told Malfurion that he was attempting to destroy the Lich King, to which Malfurion stated that he had killed Tyrande attempting to do so. Illidan was caught by surprise by this accusation, but Kael'thas Sunstrider chimed in and told Malfurion that Tyrande might be still alive as she was simply swept down the river. Realizing that Maiev had duped him, Malfurion immediately released Illidan and bound Maiev. Illidan proposed that they work together to save Tyrande. Malfurion agreed and the two began exploring the River Arevass to see where Tyrande was. Malfurion was disgusted with the presence of the naga and asked Illidan how he acquired their services, to which Illidan replied that it would be better not to talk about it.[2]

They discovered Tyrande and a small number of Sentinels, who had jumped into the river after the mistress, in Silverpine Forest.[3] They were being attacked by the Scourge and, although the fight seemed hopeless, the women built a small camp and stood their ground.[3][2] An air rescue was impossible due to a large undead air force that was flying around. Illidan insisted to Malfurion that he be the one to rescue Tyrande, as he and his Naga could move quickly down the river to her position if Malfurion could hold the Scourge off for long enough. Malfurion agreed to this plan, and the brothers moved into position.[2]

Illidan and his Naga moved down the river as the Scourge pressed hard against Malfurion's Forces, who contended most of the attack to Tyrande and her Sentinels, however, Tyrande was also hard-pressed by another undead group. Illidan discovered that the river had been dammed by a group of forest trolls called the Shadowglen Trolls; his forces massacred the trolls to destroy the obstruction. The Scourge units were assaulted from the south and were taken by surprise by Illidan's Naga, after defeating that base he marched north and destroyed the undead base that was between him and Tyrande. Meanwhile Malfurion destroyed a base of the Scourge and hold up against another base who sent numerous undead against him.[2]

Upon destroying the main Undead base responsible for the attacks on Tyrande, he arrived to rescue her. At first, Tyrande thought that he was there to kill her personally, but learned that he and Malfurion had worked together to save her.[3] Illidan created a portal through which he and Tyrande escaped,[2] while their forces fought a way free between the Scourge and joined with Malfurion's Forces.[3] 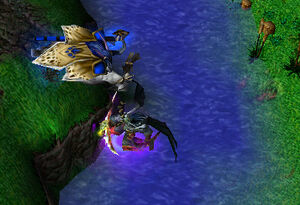 The spot in which the two exchange items.

Tyrande and Malfurion were overjoyed.[3] Malfurion admited that, if Illidan had not aided him, he wouldn't have been able to save Tyrande.[2] Illidan then travels to Outland, just as Maiev arrived and accused the two of letting a criminal walk free. Tyrande attempted to talk Maiev out of it, but Malfurion stopped her, telling her that Maiev became vengeance herself, and prayed that in her zeal she wouldn't cause more havoc than Illidan doing so.