From Wowpedia
(Redirected from The Bulwark)
Jump to: navigation, search

The Bulwark is the Forsaken's last bastion of defense against the forces of the Scourge to the east, located on the border of Tirisfal Glades and the Western Plaguelands. The Argent Dawn and Forsaken defenders at the Bulwark have teamed up to protect the land from the hordes of undead to the east, and send experienced adventurers of the Horde to battle the minions of the Lich King. 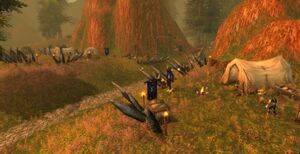 The Bulwark has been updated with Forsaken-themed architecture and is now more fortified than ever. Some Forsaken units have been added to the area to defend it against any Alliance or Scourge attacks. Additionally, an innkeeper and flight master have been added.

The Bulwark is a makeshift wall of debris stacked along the border between Tirisfal Glades and the Western Plaguelands. The barricade would not stand up to a concentrated assault but serves to keep out roaming zombies and ghouls.[1]