The Call for Allies (Alliance) 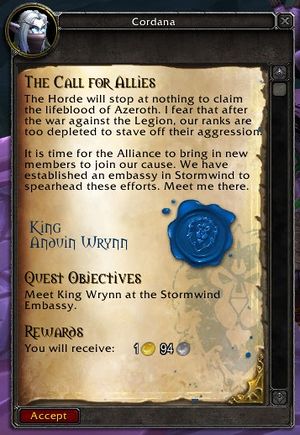 The Alliance has been beset by dangers growing throughout all of Azeroth.

The only way we will keep our friends safe is if we seek out new allies.

I have been tasked as an ambassador to help seek these allies. Come to our embassy in Stormwind, I could use your help.

Thank you for coming, <name>. Finding new allies isn't easy, but your support will help. 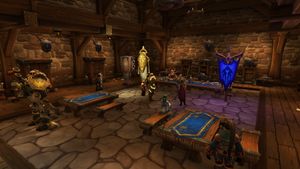 Anduin Wrynn says: Thank you for joining us, champion. These are dire times indeed.
Anduin Wrynn says: We all know the Alliance incurred heavy losses in the war against the Legion. And even now, the world bleeds in the aftermath of Sargeras's final strike.
Anduin Wrynn says: Meanwhile, the Horde musters its forces and arms for war. Their aggression must not go unanswered.
Anduin Wrynn says: Our future depends on bringing other like-minded allies into the fold. I call upon those of you gathered here for suggestions.
Lady Jaina Proudmoore says: Kul Tiras stands ready to answer the call to arms.
Lady Jaina Proudmoore says: Though we have already rejoined the Alliance, we wish to present you with a token of our unity.
Anduin Wrynn says: I am curious to see what you have in mind, Lord Admiral.
Moira Thaurissan says: The Alliance have need of our sorcery, as well as our strength.
Moira Thaurissan says: The Dark Iron clan will have the respect it is due.
Anduin Wrynn says: You are always welcome in Stormwind.
High Exarch Turalyon says: Victory on Argus was only possible because the heroes of Azeroth fought side-by-side with the Army of the Light.
High Exarch Turalyon says: Many of our bravest soldiers gave their lives for the cause. Those who remain would be proud to join the Alliance.
High Exarch Turalyon says: Among our number are brave initiates about to undertake the arduous path of becoming Lightforged.
Anduin Wrynn says: Thank you, High Exarch. Lightforged soldiers would indeed bring strength to our numbers.
Alleria Windrunner says: High King, I remember the days when my people and yours fought together against the Horde.
Alleria Windrunner says: I reached out to them in hopes of seeing Silvermoon return to the Alliance. My efforts proved... futile.
Alleria Windrunner says: But I did learn of a group of sin'dorei who have been exiled for studying the void as I have. If I could locate them, their knowledge might aid our cause.
Anduin Wrynn says: Stormwind has suffered at the hands of those who succumbed to the shadow's whispers. But if others could master its power as you have, they would make formidable allies.
Anduin Wrynn says: Thank you both for your counsel. I would like to hear our champion's perspective on which of these potential allies we should reach out to first.

The Horde will stop at nothing to claim the lifeblood of Azeroth. I fear that after the war against the Legion, our ranks are too depleted to stave off their aggression.

It is time for the Alliance to bring in new members to join our cause. We have established an embassy in Stormwind to spearhead these efforts. Meet me there.

Welcome, <name>. I am pleased you answered the call.