The Call of Icecrown

Head to Icecrown and obtain the Blades of the Fallen Prince.

I have ordered your brethren to Icecrown to prepare for the coming conflict, but I have a more important fate in mind for you. You, <name>, will be the hand of our vengeance!

Use the Death Gate to return to Acherus and I shall reveal your role in this.

The Lich King made a wise choice in giving you those blades, <name>. You've more then proven yourself worthy of them.

I have to admit though, I'm glad it wasn't me, I'm through with having magical weapons dictate my fate.

Upon entering the Death Gate, a short cutscene plays, showing Acherus floating next to Icecrown Citadel. You are then automatically placed in a single-player scenario. While you are on this quest, you won't be able to conduct normal business in Acherus.

Stage 1: The Call of the North

The Lich King awaits your return to the citadel.

Head directly north past the balcony and over the bone bridge connecting the Ebon Hold to Icecrown. Lady Alistra and Lord Thorval are standing on the east side of the balcony.

Lady Alistra says: Look, it's <name>! I told you he was going to be the one chosen. Now, pay up!
Lord Thorval says: One of Amal'thazad's students? Bah! Fine, take your gold.

Once you pass over to Icecrown, Dagnar Stonebrow and Minerva Ravensorrow will walk in the opposite direction to you to take their place on the balcony of Acherus.

Dagnar Stonebrow says: Hurry up, Minerva! We're about to pull out of here. Mograine will kill us if we hold things up!
Minerva Ravensorrow says: We're already dead, idiot!

Interact with the Scourge Transporter to begin the next stage.

The transporter glimmers with a crystalline light.

Stage 2: The Gates Are Open

The Lich King says: Enter, <name>, there is much to be done. 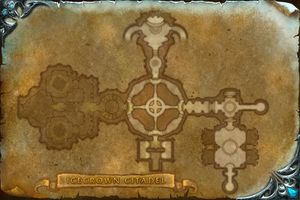 The Lich King says: Many of the souls freed by Frostmourne's destruction now wander the halls of Icecrown, lashing out in eternal torment.
The Lich King says: Destroy them, and gather the fragments of the blade, for they will be the heart of your new weapon.

Fight your way through the hallways until you reach the Spire. Kill Baelgun Flamebeard and then retrieve the first fragment.

The Lich King says: Baelgun's soul was cursed to relive the moment of his death for eternity and will see you as his enemy. Destroy him.

Proceed northeast to Halahk the Deathbringer.

The Lich King says: The soul of Halahk was tortured within Frostmourne till he cursed the Light. Now that he has forsaken it, slay him.

Head northwest to Magroth the Defender.

The Lich King says: Even when consumed by Frostmourne, the soul of Magroth refused to give up the Light. Show him the error of his ways.

Finally, fight your way south to the central Spire to face Gavinrad the Cruel and loot the final fragment.

The Lich King says: Once hailed by Arthas as a brother, Gavinrad too was ultimately fed to Frostmourne. Grant him a final death.

Stage 4: Travel to the Frozen Throne

Use the Scourge Teleporter within the Spire. 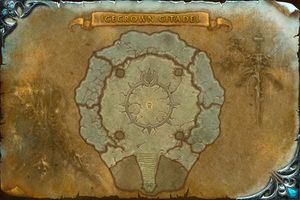 Reforge the fragments and form your weapon.

The hilt of Frostmourne is found at the center of the Frozen Throne, encased in ice.

The Lich King says: Behold, the hilt of Frostmourne. From its broken form you will create a blade without equal! Approach and channel your power into it to create your weapon.

Upon interacting with the hilt, the blade is lifted into the air, shatters into fragments and then reforms into the Blades of the Fallen Prince.

The Lich King says: It is done. From the shards of Frostmourne the twin blades are born! Soon, they shall feed upon the souls of my enemies!
The Lich King says: I sense powerful spirits remain within the blades. Enter into the spiritual realm within and purge them of all resist your domination!

Purge the blades of the malevolent souls within.

Upon interacting with the blades, you are transported to an area similar to the Frostmourne subzone seen during the Lich King boss fight. Spectral echoes of Ner'zhul and Arthas Menethil are standing in front of a vision of Frostmourne.

The Echo of Arthas then becomes hostile and attacks the player while Ner'zhul teleports to the other side of the room.

Echo of Arthas Menethil says: Nothing will stand in the way of my vengeance!
Echo of Ner'zhul says: How dare you interfere! His soul belongs to ME!

Arthas will periodically cast Shadow Strike, which causes him to deal damage in a cone in front of him for several seconds, while Ner'zhul teleports to different corners of the room and continuously sends out waves of Void bolts which deal damage and knock back the player on contact. Arthas will also periodically cause

Razor Ice to sprout in an area around him.

Echo of Arthas Menethil says: Feel the icy chill of death around you!

Once Arthas reaches roughly 25% health, he will run over to Frostmourne, gain

[Divine Shield] and become invulnerable to all damage, while Ner'zhul begins summoning waves of undead. Arthas also begins casting Dark Pact, which sacrifices all undead who reach him to regain his health.

Cull the scourge before they are sacrificed!

Icefallen Geists spawn in waves of six and move quickly,

Mindless Ghouls spawn one at a time and move moderately fast, while

Enraged Zombies spawn one at a time and move slowly. Make use of

[Remorseless Winter] to defeat the geists and

[Chains of Ice] and

[Death Grip] to slow down the ghouls and zombies to prevent as many undead as possible from reaching Arthas.

After finishing the cast of Dark Pact, Arthas picks up Frostmourne and resumes the fight with the player, using the same abilities as before while Ner'zhul resumes casting waves of Void bolts.

Upon defeating Arthas, he says the following:

Echo of Arthas Menethil says: I see... only darkness... before me.
Echo of Ner'zhul says: Curse you, interloper! All my plans... ruined!

You are then automatically transported back to the Frozen Throne.

The Blades are purged of the corruption. Claim them as your own.

Upon interacting with and looting the Blades, you automatically equip them. 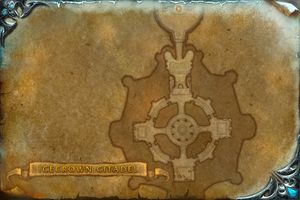 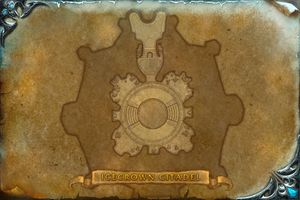 The Lich King says: You have done well. Ascend to my throne and receive your charge.

Climb the throne to stand before the Lich King.

You receive the Mark of the Lich King buff, increasing all of your stats by 5% for 60 minutes.

If the Blades of the Fallen Prince is the first artifact the player has obtained, the Lich King wil also say the following:

Final Stage: You Have Your Orders

Depart the Frozen Throne by taking the Acherus Waygate.

A waygate opens to the immediate right of the Lich King. Use it to return to Acherus and speak with Darion in the center of the Ebon Hold to complete the quest.