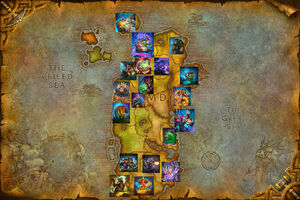 An assumption of where some bosses are located underground.

The Catacombs[1] are a series of underground tunnels the stretch out for miles to miles. It is filled with underground creatures that include kobolds, furbolgs and trogg. It also has ancient an treasure buried underneath, guarded by dragons and earthen. The area is most likely located under Kalimdor. Tale of the Fox tells the story of Marin the Fox and his encounters underground.

"Reminder: Hearthstone is not considered canon, so some of the information present is based solely on Hearthstone lore and encounters."

Aside from certainty that the location of the Catacomb is on Azeroth, it is hard to pinpoint a direct location with the little information given. Fortunately, after examining the evidence, the conclusion reached involves the entirety of Kalimdor. Since no evidence of kobolds digging under the sea is known, this can only mean that the race exists purely under the earth and the only place that fits most to all of the criteria is Kalimdor.

Should an adventurer encounter Frostfur during a Dungeon Run and be defeated, she says the following: "That's how we handle things, in Winterspring." While it can simply be her birth place, taking it a face value means that the adventurer was under Winterspring. To also support this, Frostfur is white, the standard color of all the furbolgs in Winterspring.

Aside from Elder Jari most of the furbolgs look like those of Kalimdor. The main difference between the two is the Northrend furbolgs are more fluffy with more fur. The best way to explain Jari is that in The Comic, Varian and Broll tried to free several furbolgs from their corruption in Kalimdor. If one notices their eyes, they have no irises. This means that the dire furbolg can be found in Kalimdor.[2]

During the Journey to Un'Goro expansion, two paladins of the silver hand were brought to light. In the description of Lost in the Jungle and Vinecleaver, they were lost and found. However, this is no longer the case as they are lost again. Since this takes place in Un'Goro Crater, they must be on Kalimdor.

Maximillian of Northshire and the Argent Dawn

While one may wonder how a cleric ended underground. However, if Graves the Cleric is part of the Brotherhood of Northshire then he could have followed Maximillian of Northshire. If he is part of the Argent Dawn, they have an embassy in Darnassus. Either way, this proves that followers of the light can be found here.

Djinn are only local to Kalimdor and the elemental plane. Jeeru can be encountered underground along with a Benevolent Djinn.

This is one of the conclusive proof as the bronze only make their home in Tanaris. Chronomancer Inara claimed to have out foxed them. Also Temporus can only be gotten to from the Caverns of Time.

There are plenty of oozes in Kelimdor, including the famous hearthstone Acidic Swamp Ooze in Dustwallow Marsh.

The material for creating golems can be found in Feralas.

Unlike the other legionaries, Rhok'delar can no longer be obtainable in Azeroth and it could only be gotten from Felwood.

As to why there are demons underground, Felwood is infamous for underground passages run by the Shadow Council.

A red dragon guarding treasure is rare if not unheard of. Andrestrasz the ancient lives in a cavern and even though he is not guarding anything, it is very similar to Vustrasz.

Blackseed appears to be corrupted by an Old God. Kalimdor has C'Thun.

Ixlid's environment in described and moist and moldy, where fauna and flora have taken over. Maraudon fits this description.

While Ettins are rare in Kalimdor, there are a few such as Dormus the Camel-Hoarder and Gadoon.

While everything is accounted for in Kalimdor, there is one creature who is not present and that is the Fal'dorei Strider. Since it is only one card, it may not look like a big deal as he could have found a way to get to Kalimdor, but this mob could mean that the underground extents to the Broken Isles. However, until it is proven that kobolds can build underground tunnels that can go underwater like the gnomes, this cannot be possible. Also, the Broken Shore lacks Old God presence.

There is a lot of evidence that the Broken Shore is where its mostly likely located, but it presents a problem. Should one look at the promotional art one can easily make the connection between Candle Rock and the location itself for its similarities. However, there is one thing missing that was in the trailer where the same location is shown, King Togwaggle. The answer to whether this takes place under the Broken Shore can be seen at the trailer where it confirms that King Togwaggle should be there but isn't.

There are also no troggs here.

We can easily remove these two planets as possible candidates as there are kobolds, furbolgs and troggs. The creatures found on these planets are all unique and none of them are found in the Catacombs.

The Elemental Planes are also a bust. Aside from stone troggs and earthen, these lands are meant for elements alone. There is no reason for there to be creatures of flesh, or if its even possible for living creatures to have existed there without help from the outside world. Also, we run in the same problem as Outland and Argus, in that there are no kobolds, furbolgs and flesh troggs.

Northrend is another guess, but this too provides missing inhabitants. For one, the main stars of the expedition, the kobolds are missing. There is their cousins, the snobold, but according to the Frigid Snobold, the THE CANDLE is their greatest weakness. This means that is cannot be them as none of them have candles on their head. Also, they are usually seen around magnataur and freezing environments, none of which are found.

Similar to Outland and Argus, Pandaria has its own set of creatures. While there could be troggs thanks to the Grummles. There are no groups of kobolds or furbolg in the area, as they are replaced by virmen and pandaren.

The Eastern Kingdoms could be a rival to Kalimdor, but it lacks one of the most prominent races, the furbolgs. There was the Experiment Furbolg but this is just one and was probably brought by the Highborne, not enough time to end underground. The djinn are also missing.