This article is a copy of "Blackhand", an official article by Blizzard Entertainment located in "The Characters of Warcraft" section of the online Game Guide. It presented information about the alternate universe version of the referred individual. 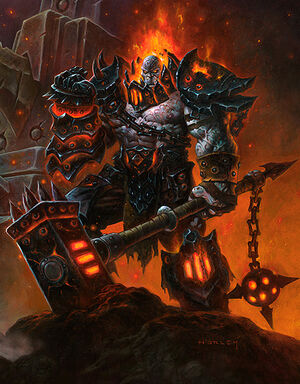 "My legacy is shaped by my power and nothing else."

Warlord of the Blackrock Clan

The iron heart of the Iron Horde, Blackhand commands his armies with meticulous might.

A warlord with massive musculature and a dominating presence, the chieftain of the Blackrock clan formed brilliant strategies and maintained rigorous order within his armies. He could always turn the tide of battle. He could always find the enemy's weakness. When ogres attacked and his clan faced annihilation, he orchestrated a daring last-minute triumph alongside his second-in-command, Orgrim. On the eve of battle, the chieftain reclaimed a famous weapon, the Doomhammer, and restored hope for victory. The elements, chaotic forces of nature that had allowed him to survive the ordeal, encased his fist in dark, heavy stone. He took a name worthy of it: Blackhand.

Blackhand was the first chieftain to join the Iron Horde under the legendary warlord Grommash Hellscream. After a mysterious prophet gave him detailed schematics, Blackhand marshaled the Blackrock clan to industrialize warfare on a colossal scale. Night and day the forges of his foundry stronghold churn out tools of destruction, machines to crush all of Draenor under heavy wheels and armored boots. A genius tactician not to be underestimated, Blackhand leads ironclad battalions of orcs, ogres, and gronn with terrifying resolve.

Blackhand and his Blackrock orcs center their operations in the wastes of Gorgrond, a landscape split between barren plains and lush jungle. Fissures mar the terrain and emit noxious fumes, poisoning the air with vile clouds of sulfur and smoke. Chiseling their fortress into the slope of a massive mountain, the Blackrocks stubbornly endure in a land torn apart by giants of the earth and the forest.