This article is a copy of "Rexxar", an official article by Blizzard Entertainment located in "The Characters of Warcraft" section of the online Game Guide. It presented information about Rexxar. 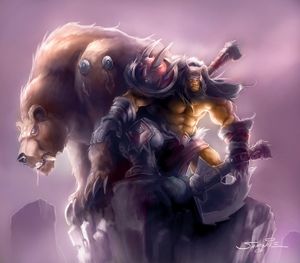 "Only beasts are above deceit."

Champion of the Horde

Despite his fragmented heritage, Rexxar was instrumental in early Horde victories and the establishment of Orgrimmar.

One of the greatest heroes of the Horde was the fruit of an unusual union between orc and ogre. Raised by the Mok'nathal clan on Draenor, Rexxar's massive size and strength made him invaluable during the Horde invasion of Azeroth during the First War , despite his mixed heritage. Yet, bloodshed and backstabbing from within his faction (coupled with the death of his companion wolf Haratha at the hands of an orc warlock) eventually diminished Rexxar's will to fight for the Horde, and he left to wander alone. Rexxar disappeared in Azeroth with new companions, including the bear Misha; now, he trusted the wilderness more than the "civilized" world.

During the Third War, while traveling through Kalimdor's Barrens, Rexxar stumbled upon Mogrin, an orc warrior defeated by quilboar, and agreed to take a message to the new warchief of the Horde. Journeying to the recently built city of Orgrimmar, Rexxar met the young warchief Thrall, who schooled him in the attitudes of a reformed Horde. Impressed by what he saw, Rexxar decided to fight alongside the troll scout Rokhan and the pandaren traveler Chen Stormstout to keep Orgrimmar safe from the attacks of Grand Admiral Daelin Proudmoore. Daelin ignored the pleas of his daughter Jaina and attacked the Horde, believing them to be untrustworthy monsters. Rexxar led a counterattack, which led to the death of the grand admiral. With Orgrimmar established, the newly-titled Champion of the Horde returned to his homeland in Outland, the remnants of the world of Draenor. Rexxar remains ever ready to serve the new Horde – his true people – once again.