This article is a copy of "Sunwalker Dezco", an official article by Blizzard Entertainment located in "The Characters of Warcraft" section of the online Game Guide. It presented information about Sunwalker Dezco. 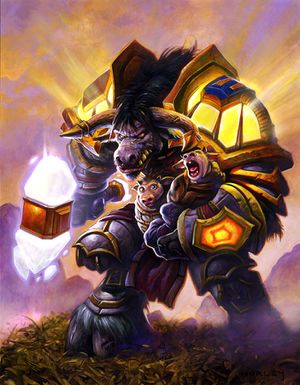 "The dreams brought us here."

Chieftain of the Dawnchaser Tribe

The chieftain of the Dawnchaser tribe, Dezco, is one of the most prominent Sunwalkers: tauren who revere An'she, the Sun, and draw their power from her light.

After the Cataclysm, Dezco, his pregnant wife Leza, and other members of his tribe received a vision of a golden, verdant land of peace hidden in uncharted waters. The Dawnchaser tribe suffered tremendous tragedies on their way to find that valley. Ships were lost at sea, tribe members perished in mogu attacks, and Dezco's wife died giving birth to twins—although with help from a champion of the Horde, the twins survived their perilous time in the Krasarang Wilds. Sunwalker Dezco pushed onward, leading his tribe to the gates of the Vale of Eternal Blossoms—the place some had seen in their visions. After convincing the August Celestials to allow outsiders access to the sacred place—with the help of Anduin Wrynn—the Dawnchaser tribe settled at the Shrine of Two Moons and committed themselves to defending the Vale against the mogu.

Some time later, the Celestial of Hope, Chi-Ji the Red Crane, informed Sunwalker Dezco that one of his children was destined to join the protectors of the Vale, the Golden Lotus. Stunned by the news and unwilling to allow either of his sons to grow up away from their tauren heritage, Dezco decided to return to Mulgore. In his journey across the Vale, Dezco and a group of refugees fell victim to a mogu raid, and despite Dezco's best efforts to keep both of his children alive, when the fighting settled, one child was dead and the other dying from mogu poisons. A member of the Golden Lotus, Mokimo, invoked the healing power of the Vale's waters to save the dying tauren. Dezco concluded that such a wondrous place needed and deserved all the protection he could provide, and agreed to let his remaining child grow up under the tutelage of the Golden Lotus and become a caretaker of the land.

Sunwalker Dezco continues to defend the Vale, and indeed, all of Pandaria, from those who would bring harm to it.