The Characters of Warcraft/Tyrande Whisperwind

This article is a copy of "Tyrande Whisperwind", an official article by Blizzard Entertainment located in "The Characters of Warcraft" section of the online Game Guide. It presented information about Tyrande Whisperwind. 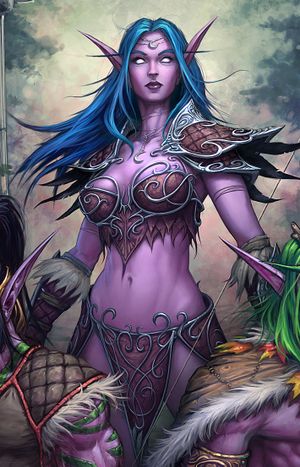 "Only the Goddess may forbid me anything."

A peerless hunter by moonlight and the chosen of the goddess Elune, Tyrande has led the night elves in war for ages.

Tyrande was born thousands of years ago and grew up in the company of Malfurion and Illidan Stormrage. She answered the call of the Sisters of Elune, followers of the night elves' Goddess of the Moon, and became a novice priestess, while the Stormrage brothers followed different paths. Their destinies merged anew when the Burning Legion arrived on Azeroth.

Tyrande and Malfurion grew close and battled against the invading demons together, but Illidan pursued a darker path, feigning allegiance to the Burning Legion and succumbing to the temptations of power. After the defeat of the Legion and the Sundering, Tyrande and Malfurion helped rebuild elven society; Illidan was imprisoned beneath Mount Hyjal. The couple could not remain together for long; soon after the night elves settled near Mount Hyjal, Malfurion and the other night elf druids were needed in the Emerald Dream. While Malfurion slept in the Dream, Tyrande commanded her people, forming the Sentinels – the night elven army – to guard their lands and allies.

During the Third War, Tyrande sent her Sentinels to deter the advances of the Horde in Kalimdor, but ultimately ended up working with them to battle the armies of the Burning Legion, an effort that also forced her to awaken the druids, including Malfurion, from the Emerald Dream. Their time together was cut short when the elder Stormrage suffered from the corruption of the Dream, but Tyrande joined her lover to defeat the menace, and they both returned to Azeroth, where they protected their people (and the other races of the Alliance) from the destruction caused by Deathwing and the advances of Garrosh Hellscream in Kalimdor.