This article is a copy of "Valeera Sanguinar", an official article by Blizzard Entertainment located in "The Characters of Warcraft" section of the online Game Guide. It presented information about Valeera Sanguinar. 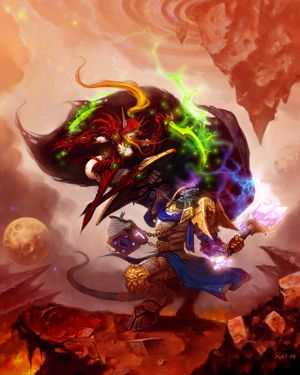 "What has either faction ever done for me?"

Though she refuses to take sides in the war of Horde and Alliance, this blood elf has saved the life of Stormwind’s king more than once.

Valeera Sanguinar was lucky to survive the bandit raid that killed her family, even though she had no place to go—her people were devastated by the undead Scourge's attack on the elven capital of Quel'Thalas. The young blood elf lived a survivalist existence until she was arrested for theft and later sold to Rehgar Earthfury, who put her to work as a gladiator alongside the night elf druid Broll Bearmantle and the orc Bloodeye Redfist. When Redfist was killed, Valeera and Broll were teamed up with an amnesiac human warrior who would later become known as Lo'Gosh, the "Ghost Wolf."

The trio quickly discovered that Lo'Gosh was Varian Wrynn, the missing king of Stormwind, and they embarked on a journey to restore his memory and throne, pitting themselves against the black dragon Onyxia, who secretly controlled the human kingdom. During the expedition, an assassin placed a demon's mark on Valeera, leaving her possessed and vulnerable to the demon's influence.

The possession amplified Valeera's racial addiction to magic, but she managed to expel the demon with the help of the undead mage Meryl Felstorm and Aegwynn, the former Guardian of Tirisfal, a mage empowered to protect Azeroth from the Burning Legion. Once he'd regained his crown, King Varian offered Valeera a position as an advisor in Stormwind, and she accepted, though with one condition. She is not loyal to the Alliance; she is loyal to Varian Wrynn and his son, Anduin.