The Cloudkisser at Vengeance Landing.

The Cloudkisser is a zeppelin that runs from the west zeppelin tower in Tirisfal Glades to Vengeance Landing in the Howling Fjord.

The Cloudkisser has a new, somewhat more compact design compared to the zeppelins which operate on the routes between the Eastern Kingdoms and Kalimdor. A distinctive shark mouth visually differentiates this zeppelin from the older craft, and it is equipped with floodlights to help light its way. There are less crewmen and no vending machines.

This zeppelin was added in Wrath of the Lich King.

In World of Warcraft: Battle for Azeroth the zeppelin was replaced by mage portals, as it got lost over the Great Sea on its eight-hundred and fifteenth flight without refueling.[1] 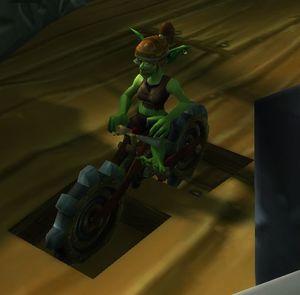