The Codex of Blood 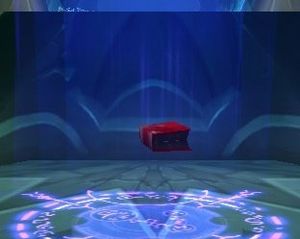 The Shadow Council within the Shadow Labyrinth of Auchindoun uses a forbidden book of unholy summoning, known only as the Codex of Blood. The musty pages of the codex seem to magically turn themselves, guiding attention to a specific chapter past horrors no mortal eyes should ever perceive.

The Codex of Blood

Long ago, in a dimension of the cosmos unfathomable to mortal minds, there was born - if such a term can be used for it - a being of such unbelievable power that its very entrance into existence shattered all reality around it.

Known only as Murmur, it was the essence of sound. And to hear it speak was to know death eternal!

Existing only for chaos, its slightest whisper meant the destruction of whole worlds!

Yet still, there were those that would try to worship this mindless being. There were even those more insane who dared to think to control it!

And lo, how the mighty fell trembling at its feet, fearful that it might direct its words upon them.

But still did these charlatans, these worshipping pretenders to a non-existent religion, rail against the inevitable in a vain attempt to control their 'god'. Uncaring, and likely not even noticing them, Murmur yawned and they knew oblivion.

Yet one somehow managed to survive, and in his insanity found a way to bring Murmur into the world.

A mortal possessed of arcane and dark knowledge that none could surpass, he devised a method to enhance his summoning through the capture and use of souls untold.

Whole civilizations were brought to extinction through his soul devices to fuel the ritual through which he and his conspirators would bring Murmur into their world.

And summon forth Murmur they did.

Powerful magics of containment and silencing were employed, held together by the constant supply of souls being fed into them. Yet still they could not control the beast, could not bend it to their will.

These mortals began to devise different strategies, and one after the other they all failed. And in so doing, they weakened the rituals, accidentally giving Murmur the slightest modicum of freedom.

It was all that was needed.

Only this book survived the cataclysm that destroyed their world. Those proud and foolish men who thought to control a cosmic being of untold power.

Would you, the possessor of the codex, do the same?

Have you devised a foolproof method to summon forth Murmur, or any of the other entities cautiously whispered of in these unhallowed pages?