From Wowpedia
(Redirected from The Crossing)
Jump to: navigation, search

The Crossing is a secret chapter of Curse of the Blood Elves. Moments after Kael and Vashj killed Kassan, Vashj reopened the portal that Kel'thuzad used to bring the Burning Legion into Azeroth.

Garithos ordered his troops to take explosives from a pile of explosive barrels, ignore the defenses and destroy the portal. He convincingly told them that the one who destroyed the portal would be a hero.

Kael, Vashj and some Blood Elf Engineers needed to hold Garithos forces from destroying the portal to Outland. The Blood Elf Engineers reconstruct the Dalaran's primary defenses, they constructed five types of defensive towers, they started constructing more and more towers with the resources taken from Kassan's prison while Garithos' Elite Guard ran past the towers ignoring them, with the only objective of destroying the portal by detonating explosives at it. After most of Garithos' forces were destroyed all of Kael's forces had passed through the portal, Kael ordered the Engineers to fall back to the portal, then he and Vashj passed through the portal and after that it was closed.

Moments later, as the allied blood elves and naga spill into the back alleys of Dalaran...

Prince Kael'thas: Quickly, my brethren, take your positions. Garithos' forces will be here any moment.

Lady Vashj: We have reached the portal, Kael. Now we'll attempt to open it!

Engineer: Prince Kael, the other engineers and I helped to build Dalaran's original defenses. We could salvage materials from these ruins and construct whatever defensive towers you need.

Prince Kael'thas: Glad to hear it. You'd best get moving.

Grand Marshal Garithos: Blasted elves, I knew they'd try something like this. Forget about those damned towers--I want that portal destroyed! Those traitors aren't going anywhere.

Grand Marshal Garithos: Use these explosives on the portal!

Grand Marshal Garithos: Whoever destroys the portal will be a hero!

Lady Vashj: We've done it. The portal is open. Let the exodus begin!

Prince Kael'thas: Well done, Vashj. If we build more strategic towers, we should be able to hold off Garithos' forces long enough for our people to get through.

Lady Vashj: You'd better be right. If the portal falls, none of us will survive!

Engineer: Prince Kael, the plans are complete for this new tower.

Lady Vashj: Kael, nearly half of our forces are through! You've got to hold Garithos at bay!

Engineer: Prince Kael, this new tower is our final and ultimate creation.

Grand Marshal Garithos: Bust open the cages! We'll all need the beasts we can use.

Lady Vashj: Nearly everyone is through! Just a while longer, and we'll have done it!

Lady Vashj: Kael, everyone is through! Fall back and we'll close the portal behind us!

Prince Kael'thas: All right, men! Pull back! Back to the portal! 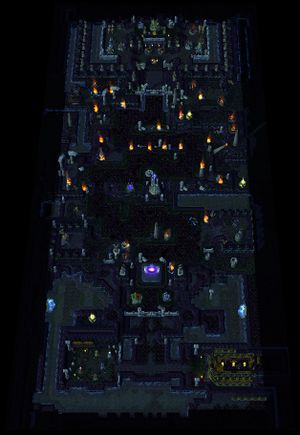