The Crystal Blade of Torvath 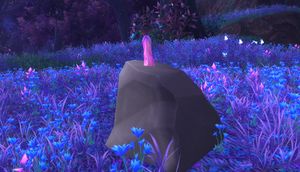 The sword in the stone

at the south end of the Shimmer Moor in southeast Shadowmoon Valley. Interact with it:

<An inscription on the hilt reads:>
"Here Vindicator Torvath fell in battle to end the rage of the ancients.
May the light shine upon this grove that he so valiantly defended to protect and may it forever bring peace upon its denizens."

<Touch the sword.>
The Grove of Ancients begins to awaken!

A Silverleaf Ancient from the south starts walking toward the player and attacks!

A second ancient is called to battle.

This one walks in from the north.

A third ancient moves to attack!

The final ancient attacks from the east.

Once the last ancient is dead, loot the Crystal Blade of Torvath from the stone.

To check whether the sword has been pulled from the stone, copy and paste this command into the chat window:

If a "true" appears in the chat window, the sword has been pulled from the stone; "false" indicates the opposite.