This article is about the Warcraft III mission. For other uses, see Culling of Stratholme (disambiguation).

The Culling is Chapter Six of The Scourge of Lordaeron.

It was the slaughter of a large portion of the civilian population of Stratholme at the hands of Prince Arthas, who sought to prevent the spread of the Plague of Undeath at any cost necessary. This event also marked the (temporary) disbanding of the Silver Hand, as Uther the Lightbringer refused to follow the order of executing civilians. More importantly, the event marked Prince Arthas's first major step to becoming a death knight by slaughtering his own people.

Early the next morning, on the outskirts of Stratholme...

Stratholme has a unique map, with Arthas attacking the city from the north. It notably contains a zoo.

The map is way more similar to its World of Warcraft incarnation, with several modern landmarks like the gates of the city, the Bastion of the Silver Hand, Market Row, and Alonsus Chapel. By extension, the city's architecture has been redesigned to better suit the style of the Alliance—the orca statues and Grecian-styled columns have been removed. However, these assets will remain available in the map editor.[1] Other differences include: 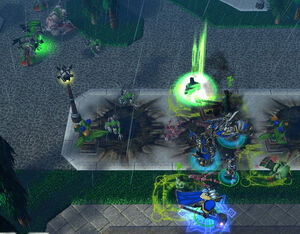 Mal'Ganis seeks to turn Stratholme's citizens into his Undead slaves. If he is successful, his armies will be unstoppable. You must destroy their homes and put the plagued wretches out of their misery before Mal'Ganis can claim their souls.

Uther, Jaina, and the Knights of the Silver Hand arrive at Arthas' base outside Stratholme.

Arthas: Glad you could make it, Uther.

Uther the Lightbringer: Watch your tone with me, boy. You may be the prince, but I'm still your superior as a paladin!

Arthas: As if I could forget. Listen, Uther, there's something about the plague you should know...

Arthas: Oh, no. We're too late. These people have all been infected! They may look fine now, but it's just a matter of time before they turn into the undead!

Uther the Lightbringer: What?

Arthas: This entire city must be purged.

Uther the Lightbringer: How can you even consider that? There's got to be some other way.

Arthas: Damn it, Uther! As your future king, I order you to purge this city!

Uther the Lightbringer: You are not my king yet, boy! Nor would I obey that command even if you were!

Arthas: Then I must consider this an act of treason.

Uther the Lightbringer: Treason? Have you lost your mind, Arthas?

Arthas: Have I? Lord Uther, by my right of succession and the sovereignty of my crown, I hereby relieve you of your command and suspend your paladins from service.

Arthas: It's done! Those of you who have the will to save this land, follow me! The rest of you... get out of my sight!
The knights depart.

Arthas: Jaina?
Jaina stops for a moment, without turning around.

Jaina Proudmoore: I'm sorry, Arthas. I can't watch you do this.
Jaina leaves.

Mal'Ganis: I've been waiting for you, young prince. I am Mal'Ganis.
Mal'Ganis and the Ghouls destroy a nearby building and begin transforming its denizens into Zombies.

Mal'Ganis: As you can see, your people are now mine. I will now turn this city household by household, until the flame of life has been snuffed out... forever.

Arthas: I won't allow it, Mal'Ganis! Better that these people die by my hand than serve as your slaves in death!

Necromancer: Go sniff somewhere else, pup. You best draw back to your senile father and await the end of your reign.

Mal'Ganis: I live once more!

Arthas: We're going to finish this right now, Mal'Ganis. Just you and me.

Players are able to experience this event in the Caverns of Time: Culling of Stratholme in Wrath of the Lich King.