The Cult of the Damned (WC3 Human)

This article is about the mission in Warcraft III. For the organization, see Cult of the Damned.

Cult of the Damned is Chapter Four of the Scourge of Lordaeron campaign.

The next day, on the outskirts of Andorhal... 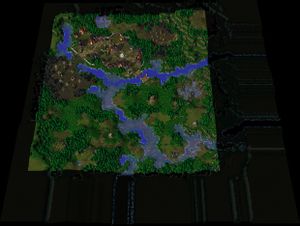 (Notice "hi" written in the lower-right corner beyond the playable boundary.)

The plagued crates of grain seem to have originated from Andorhal, the distribution center of Lordaeron's agricultural products. Investigate Andorhal and ascertain whether there is any link between the mysterious cultists and the dread plague.

The evil Necromancer, Kel'Thuzad, is apparently responsible for spreading the mysterious plague. Hunt the renegade wizard down and bring him to justice!

Arthas and Jaina's forces arrive to a clearing just as a group of Acolytes begin taking control of a gold mine.

Jaina Proudmoore: Look! It's those cultists who were with the necromancer! What are they doing to that mine?

Arthas: Let's not wait to find out! Attack!
The Acolytes flee. One is a bit too slow and gets killed by Arthas.

Acolyte: Damn these intruders! They must not interfere with the master's plan!

Arthas: Let's build a base camp here. With those cultists creeping around, I'd rather not head in there without backup.

Jaina Proudmoore: I couldn't agree more.
Peasants begin constructing a base around the mine.

Arthas and Jaina confront Kel'Thuzad in the center of Andorhal.

Kel'Thuzad: Hello again, children. I am Kel'Thuzad, and I've come to deliver a warning. Leave well enough alone. Your curiosity will be the death of you.

Arthas: Are you responsible for this plague, necromancer? Is this cult your doing?

Kel'Thuzad: Yes, I ordered the Cult of the Damned to distribute the plagued grain. But the sole credit is not mine.

Jaina Proudmoore: What do you mean?

Kel'Thuzad: I serve the dreadlord Mal'Ganis. He commands the Scourge that will cleanse this land and establish a paradise of eternal darkness!

Arthas: And what exactly is this Scourge meant to cleanse?

Kel'Thuzad: Why, the living, of course. His plan is already in motion. Seek him out at Stratholme if you need further proof.
The necromancer shuffles away.

Kel'Thuzad: Naive fool. My death will make little difference in the long run. For, now, the scourging of this land... begins.
Kel'Thuzad dies.

This mission does not require either constructing a base or making soldiers. The best way to complete this mission is to cast Divine Shield on Arthas as you enter the Undead camp. Keep moving until you reach Andorhal. Then, the cutscene will occur. Destroy the granaries and the ghouls Kel'Thuzad had,then (optional) free Timmy and get your reward. Continue to advance, and you should come across two ghouls. Cast Holy Light on one,and then kill him, then do the same with the other one. As you enter Kel'Thuzad's throne, guarded by abominations, once again cast Divine Shield, move forward to Kel'Thuzad and kill him. The process should take about 10 minutes.