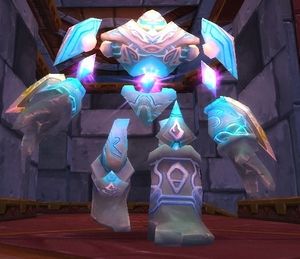 The Curator as it appears in-game

The Curator is an Arcane Guardian boss in the Menagerie in Karazhan. It is not optional, raids wanting to kill the bosses behind it must first defeat The Curator. The encounter is not difficult to learn, but is (for new raids) a rather hard gear check. A raid able to defeat this boss is in principle equipped well enough to clear the whole instance, save perhaps Nightbane and Prince Malchezaar.

Though already defeated, the Curator reappears in Dark Riders battling against Revil Kost and a group of the Night Watchers.[1] Ancient Curators appear in the Guardian's Library years later, and a similar construct known as the Conservator is encountered in the Karazhan Catacombs.

For new raids first entering Karazhan, the Curator is rather hard to kill. It's not a coincidence that this boss drops the first class set tokens - they really want them to be earned. There's not much strategy or room for fancy maneuvers - either the raid has the required DPS and the necessary mana endurance, or it does not.

Most of the fight consists of two alternating phases: a 90 second Flare Phase followed by a 20 second Evocation Phase. Once the Curator's health drops below 15% it does a soft enrage, stops summoning Flares and Evocating, but instead increases melee attack speed and Hateful Bolt frequency. 10 minutes after the pull the Curator does a hard enrage and wipes the raid very quickly.

The Curator summons one Astral Flare every 10 seconds, at a cost of 10% of its mana. Each Flare spawns with about 1000 threat from a random, non-tank player character and advances in that character's direction while hitting nearby enemies with Arcing Sear.

Each Flare must be destroyed within 10 seconds, before the next one spawns. Failure to do so results in multiple Flares dealing damage at the same time - this situation usually means a wipe. It is not necessary to damage the Curator at all during this phase. Damaging the Curator is permissible, but only when no Flares are up (unless the raid has excess DPS: see Positioning below).

This cannot be over-emphasized: By far, the most important part of the fight is killing the Astral Flares as quickly as possible. Wipes usually happen because the healers run out of mana. They run out of mana because the Flares live too long. The solution is almost always to kill the Flares faster. The faster each Flare dies, the easier the healers' job becomes.

While it is not necessary to tank the Flares, doing so gets them to hold still and makes them easier to kill. A hunter pet with attack power buffs and specced for arcane resistance and stamina is ideal for this task. Warriors, bear druids, paladins, and enhancement shamans can do the job, too. A decently-geared retribution paladin can rather easily hold the flares in place with

The Curator casts a Hateful Bolt every 10 to 15 seconds. The current best theory is that the Hateful Bolt hits the non-tank character that has generated the most threat on The Curator since the last Evocation and currently has enough health to survive the damage from the Bolt.

It is possible to assign one character - preferably a warlock or a shadow priest - as Hateful Bolt soaker. This character attracts most of the Hateful Bolts by steadily damaging The Curator. Equipping the soaker with arcane resistance gear negates a substantial amount of the damage from the Hateful Bolts. Note that using a soaker is reasonable only when the raid is still able to kill the Flares fast enough. It's typically done when using only two healers.

Immediately after The Curator summons the tenth Astral Flare with the last of its mana, it enters a state of Evocation for 20 seconds while it refills its mana. While it does so, it goes completely inactive and all damage dealt against it is tripled.

Most raids must first concentrate on killing the tenth and last Flare before switching damage over to the Curator. Otherwise, there may be two Flares up after the Evocation, which is bad (see above). Killing the Flare quickly also grants the healers a few seconds break for mana regeneration. Overgeared raids can attack The Curator immediately to speed up the fight, and clean up the extra Flares after Evocation.

Cooldown and single-use abilities that temporarily increase damage output should be saved up for this moment and be activated at the beginning of the phase to quickly kill the last Astral Flare and to make the most out of the Curator's temporary vulnerability.

Once the Curator has finished refilling mana, the fight continues with the next Flare Phase.

When The Curator's health drops below 15%, it immediately switches to the Enrage Phase. It stops summoning Astral Flares, ceases Evocations, and increases melee damage output and Hateful Bolt frequency. This means that the healers have to give the main tank and Hateful Bolt victims more attention while everyone else just nukes The Curator. This phase is actually the easiest part of the fight.

Positioning is a secondary concern, but it can help raids with marginal gear. A concentrated setup increases damage on the Flares by eliminating the need for melee damage-dealers to chase down Flares. A distributed setup reduces damage from the Flares by reducing the chaining of Arcing Sear.

If melee damage dealers are needed on the Flares, everybody except the hunters sets up close together, with the hunters as close as possible, just at their minimum range. The main tank is on one side of The Curator, and everybody else is on top of each other on its back (within melee range). This makes it easy for the melee characters to damage the Flares and quickly switch to The Curator when no Flares are up. The drawback of this method is that the Flare damage is maximized. This is offset to some extent because multi-target heal spells like

[Chain Heal] also have their maximum effect. More importantly, the Flares die more quickly in this formation, so they have less time to do damage.

If the raid's ranged DPS is high enough to kill the Flares quickly (in less than eight seconds) without support from the melee characters, the melee group sets up close to The Curator and stays put. The ranged damage dealers and healers spread out and each stays at least ten yards away from everybody else. This significantly reduces Flare damage, because Arcing Sear doesn't jump farther than ten yards. Also, the melee group is on the Curator all the time, which shortens the fight.

If melee characters have to help killing Flares, the distributed setup does not work well. Even a single melee damage dealer chasing Flares breaks the ten yard pattern, and thus the Flare damage is maximized anyways. Worse, that melee character loses a lot of damage output while running around. Because of this, a concentrated setup is best for most raids new to this encounter.

Aggro
The Menagerie is for guests only.

Evocate
Your request cannot be processed.

Enrage
Failure to comply will result in offensive action.

Death
Curator is no longer operation-a-l.

The Curator is the first boss in The Menagerie wing of the One Night in Karazhan adventure in Hearthstone. Defeating that wing awards it as a legendary card.