The Curse and the Silence 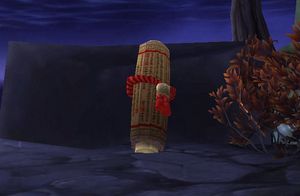 The Curse and the Silence

in the clearing of the northwestern exit of the Lightning Vein Mine on the northwestern side of the Isle of Thunder. It tells a tale of the time of the mogu before and after the Curse of Flesh. Interacting with the lore object is one of the requirements of the Pandaria exploration achievement

For many ages the mogu guarded the great works of the titans. Always they listened to their master. Always they were obedient. With stony determination, they stood in ageless vigil.

Even as their master fell silent.

No mogu writings survive from the era when their stone turned to flesh. How terrifying it must have been for the mogu to breathe, to bleed, to die.

They turned to their master for guidance, but still, he was silent.

With flesh came the other curses of mortality: pride and greed, fear and anger. No longer united in purpose, the mogu fought amongst themselves.

Powerful mogu warlords gathered up followers and made war on one another. Their battles scorched the land, terrifying the other mortal races.

And still, their master said nothing.

Immediately in front of the lore object is a Primal Ritual Stone, used to summon the summonable bosses with Shan'ze Ritual Stones.