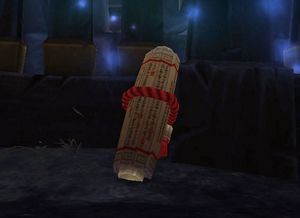 in the pen with the Defiant Devilsaur in the Beast Pens on the northwestern side of the Isle of Thunder. Interacting with the lore object is one of the requirements of the Pandaria exploration achievement

Among the Zanchuli Council are many priests and mages of incredible power and forbidden knowledge. One of the most respected of these is Zul. Even as a child his dark and terrible visions had come true down to the last horrifying detail. He commanded fear and respect as one of the dark prophets: seers capable of witnessing great tragedies before they came to pass.

In the months before the Cataclysm, Zul's nightmares were haunted by terrible visions of a world torn asunder. He consulted all the signs and was convinced that the Zandalari homeland would be destroyed in the coming apocalypse. He advised the council and king to unit with the other troll tribes and to abandon their doomed homeland.

Despite Zul's infamy, the council refused to believe in the scope of the disaster to come. Many felt that Zul was grandstanding to increase his own status and power. They scoffed as he and his followers began assembling a war fleet and reaching out to the lesser troll races.

But Zul's visions were visions of the truth. Deathwing's Cataclysm rocked Zandalar to its foundations. Even now the mighty and enigmatic troll empire slides inexorably into the sea, and Zandalari peasants and warriors alike flock to Zul for guidance on what to do next.