The Dawn of Chaos 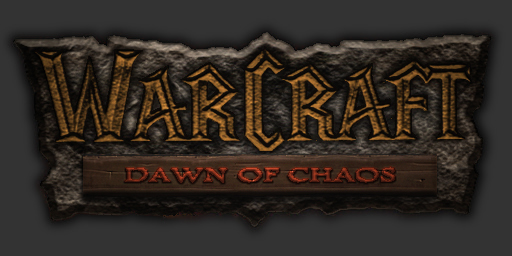 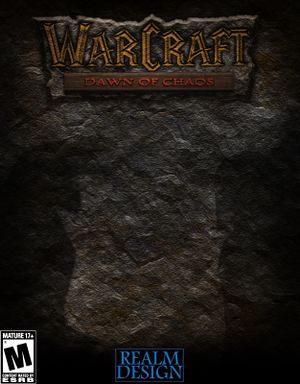 The Dawn of Chaos is a total conversion for Blizzard Entertainment's Warcraft III: The Frozen Throne, recreating the classic, but outdated, Warcraft: Orcs and Humans with updated graphics, a modified storyline, and a new hero system. The project is commonly referred to as DoC.

Warcraft: Orcs and Humans was released to the public in 1995 and took the gaming world by storm. Its sequels, Warcraft II (and its expansion) and Warcraft III (and its expansion) were fantastically successful, leading to the present-day release of World of Warcraft. New fans to Azeroth are often unwilling to play the original Warcraft: Orcs & Humans because of several reasons: mainly, that the game's graphics are outdated, and that it runs poorly or not at all on new machines. Dawn of Chaos is meant to correct that injustice. As a total conversion project, it aims to recreate the first Warcraft game using the far more modern and flexible Warcraft III engine.

Dawn of Chaos isn't just a simple collection of maps for Warcraft III. With its own .exe, its own multiplayer, its own unique art and sound, and a long and engaging storyline, it is truly an entirely new experience no matter how familiar you are with the Warcraft series. 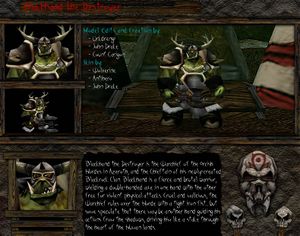 The aim of Dawn of Chaos is to create a total conversion that will ultimately appear to be an entirely new game. Only the most restricted elements of Warcraft III remain, and DoC is essentially a unique product that utilizes the Warcraft III engine.

Dawn of Chaos has its own entirely unique graphical style. No visual element of Warcraft III is included without extreme revision, because the graphical style of this mod and its parent game do not correspond at all. DoC has an extremely dark, vibrant visual scheme, with more realistic textures and coloration. Every tileset, structure, unit, interface, loading screen, 'glue screen', doodad, font, menu, and visual effect has been created or altered specifically for use in this project. The effect is genuinely one of an entirely new game.

This link leads to a forum discussion thread with a gallery of all major human and orc units. 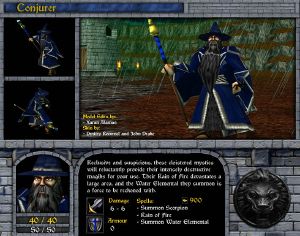 Like the visual elements, the sound in Dawn of Chaos is wholly original to this project. Unlike other modifications of Warcraft III, any situation that would have audio in a commercially-prepared game will have audio in DoC. This includes voice acting, music, and sound effects.

The user interface (UI) for each race has been replaced entirely. The fonts used by each interface have also been changed depending on which race you are playing, and minor changes (such as the use of square selections like Warcraft: Orcs & Humans instead of circular selections like Reign of Chaos) have also been implemented. Loading screens have been specially created for each level with help from our concept artists, involving sketches of major characters and level descriptions. 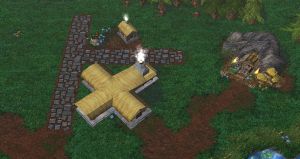 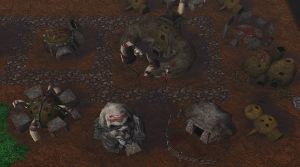 The gameplay of DoC is a mix of different styles; the classic original Warcraft: Orcs and Humans and the newer, more modern Warcraft III: The Frozen Throne. It is worth learning the basics before leaping right into the game; expert players of Warcraft III will find much that is unfamiliar to them, while players of Orcs and Humans might feel right at home.

Like any RTS, the focus of DoC is your main base.

Unlike the normal Warcraft III base-building style, DoC requires that all buildings be created adjacent to roads. You will not be able to construct any building until you place it directly adjacent to at least one square of road. This allows for complex city-building, as in Warcraft: Orcs and Humans. This feature was not included by the more simplified Warcraft II and Warcraft III, and it adds considerable depth to the construction of your base.

As with the original game, The Dawn of Chaos features a road system in which towns must be built upon roads. The roads are built by the Town Hall for the Humans and the Great Hall for the Orcs. Roads themselves can only be constructed next to other roads in grid-patterns.

Walls are slightly different from roads, but work mainly on the same principles. While still constructed from the Town/Great Hall, Walls must be built within a certain radius of one of your structures, although they do not require nearby roads. 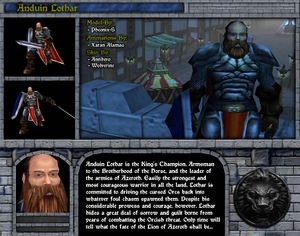 Although Dawn of Chaos is a representation of the events of Warcraft: Orcs & Humans, the storyline deviates slightly from both the original bare-bones structure and the modern revisions. 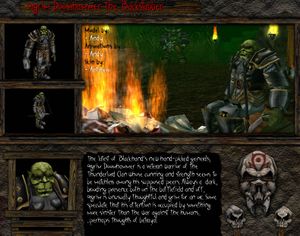 While still incomplete, The Dawn of Chaos is a long standing mod within the Warcraft 3 community, with roots dating back to 2002. The development team has released multiple demos of the engine over the past few years.

Upon release of the very first demo showcasing the engine of the mod, many errors were discovered very quickly and the demo was recalled.

With most of the problems that plagued its initial release, the Human Demo was released again to give project fans a taste of what was to come.

A multiplayer demo that featured one map that could host six players was released to the public for the purpose of beta testing as well as to reward loyal fans for their patience.

After much delays, the Misty Forest was updated and rereleased with its own gamebuild in .exe form.

After certain bugs we're reported, The Realm Design Team sought out to fix it and finally release a new version.