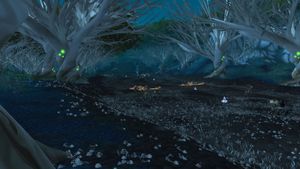 Traveling along the Dead Scar to the area where Sylvanas died. 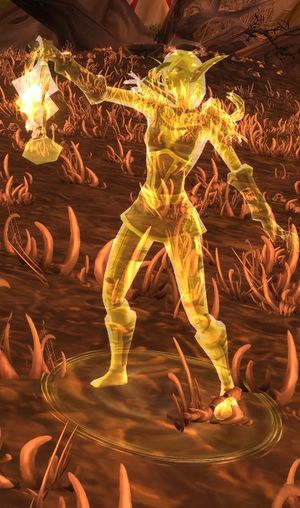 The lantern location appearing as the player's model.

Witness the fall of the Ranger-General.

The Ranger-General fell just east of Fairbreeze Village, where she was holding the line to protect the civilians as they retreated to Silvermoon. If it wasn't for her, our people would number even less than we do now.

Shine the lantern upon battlefield, and witness how her forces ultimately broke under Arthas's personal assault.

In the words of one of the more poetic retellings:

As her defenders fell, with anguish she cried: "Shindu fallah na, Sin'dorei."

She was a true Ranger-General until her last breath. May Silvermoon never forget her bravery in life.

Return to Tranquillien and fly to Fairbreeze Village, then head east into the Dead Scar close to the East Sanctum.

Light the Way — Hold the lantern aloft, showing the memories of the fallen.

Activate the lantern
Sylvanas Windrunner yells: You there--Farstrider! Man a ballista. Provide cover for the retreating civilians!
After killing 50 undead, the flash back part of Warbringers: Sylvanas plays.

The following dialog can come from a Silvermoon Defender or ranger:

You will not pass while I draw breath!
For Silvermoon!
You will fall, monsters!